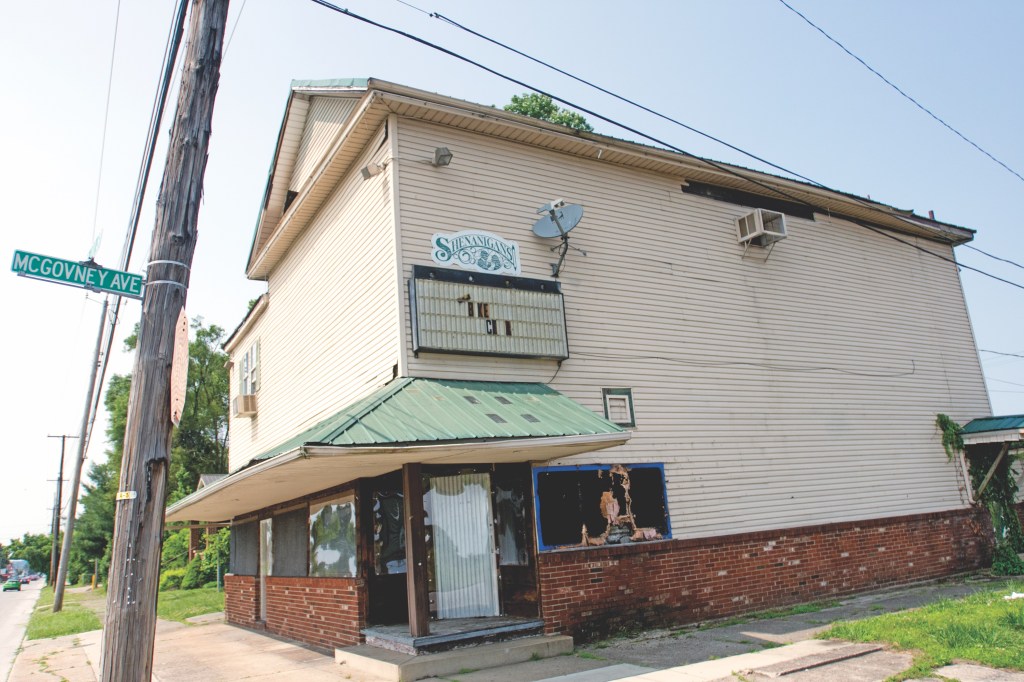 (The Tribune/Mark Shaffer) The former bar, Shenanigans, located at Third Street and McGovney Avenue in Ironton, is scheduled to be torn down by the Lawrence County Land Bank next month. It will be the 200th building demolished by the Land Bank.

Lawrence County Treasurer Stephen Dale Burcham was the first officeholder to give a report.

“I want to remind everybody that second half taxes are due July 5 this year,” he said.

He said that sales tax collections for the month of May were up $42,586 from the prior year.

In his position as the county’s Land Bank president, he announced that it would soon be doing its 200th demolition on July 15 or July 16.

“And we are targeting the old Shenanigans bar in Ironton,” he said. “We should have a big program. We have invited some of the folks who have been involved since the beginning.”

The land bank, which started in 2016, targets dilapidated properties that are abandoned and tax delinquent. Once a structure is demolished, the land is brought up to construction grade and resold.

Rick Blankenship, the assistant director of Lawrence County Department of Jobs and Family Services, reported that things are going well, although they were replacing another air conditioning unit at their building.

“There are 20 some units in that building and we are replacing them as they go out,” he said. “Things seem to be going pretty well so far.”

Bill Nenni with the Lawrence County Airport said that the airport is currently closed.

In items on the agenda, the commissioners:

• Awarded Tri-State Construction and Enterprises LLC for the restoration of public restrooms.

• Approved a fiscal year 2020 grant agreement for the Department of Youth Service Care and Custody.

The commissioners also had four executive sessions, one for pending litigation, one for property acquisition, one for real estate and one for a personnel matter.