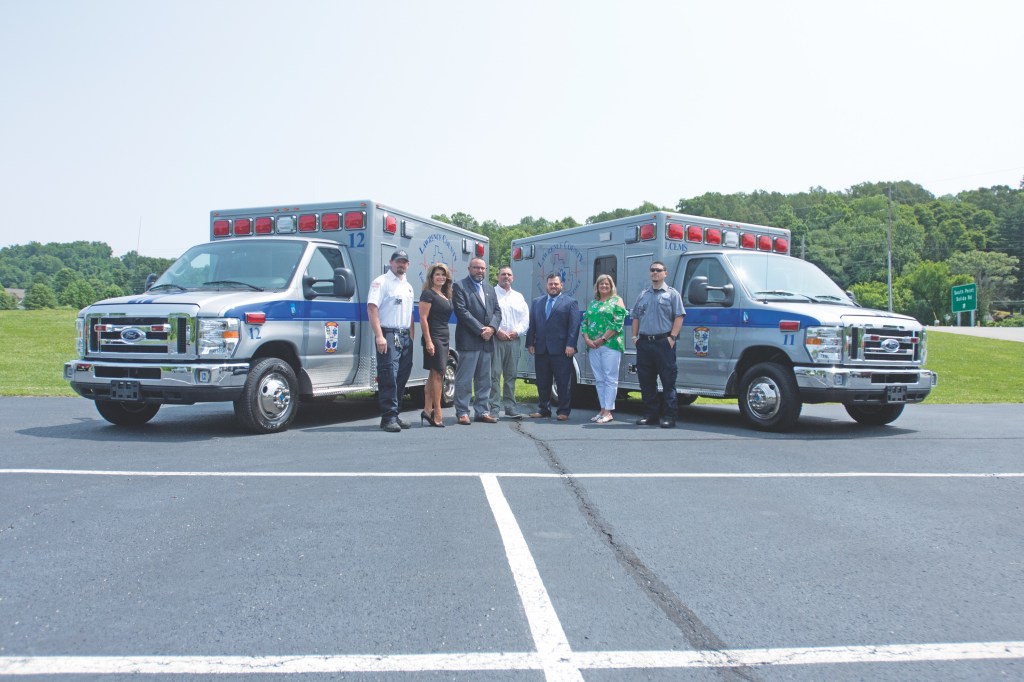 A crowd of 35,000 people has already seen them at the 151st annual Ironton-Lawrence County Memorial Day Parade on May 27, but today, two new ambulances rolled into service for those that need the services of the Lawrence County EMS.

“We purchased two 2018 Ford V10 ambulances,” said Mac Yates, the Lawrence County EMS executive director of operations. “It adds to our fleet that we’ve been buying since 2011. We now have 14.”

He said with the new ones in service, two will be pulled out of active use until the Rock Hill EMS station is opened.

“So, there won’t really be any going out of service,” said Lori Morris, Lawrence County EMS executive director of finance.

Yates said that EMS crews always need the new vehicles since last month they made 40 runs a day transporting patients to the hospital.

Yates said each ambulance, depending where it is stationed and how far it is away from the nearest hospital, puts about 50,000 miles on it each year.

“It depends, the Proctorville station is about three miles from St. Mary’s Hospital,” he said.

Lawrence County EMS brought the new ambulances to the county commissioner meeting that was held at The Chamber of Commerce building on Tuesday morning.

“The last couple of years that I have been here, we try to buy two every year, as often as we could,” said Lawrence County Commissioner Freddie Hayes Jr. “We got a great EMS and I am very excited to add two more units.”

Hayes said the EMS’s services are always in high demand.

“Like this month, we are up 350 runs this month,” he said. “So its really going to help out to have these two ambulances in service.”

The ambulances cost around $140,000 each and the medical equipment is a separate cost, which adds another $10,000 to the total.

Morris said the ambulances were purchased with money from the Lawrence County EMS levy and a program offered through the treasurer’s office.

The average ambulance has a long life on the roads of Lawrence County.

“We still have ones from 2010,” Yates said. “Maintenance is religiously done to keep them in service.”

In addition to the new ambulances, the EMTs have new uniforms.

“Starting Memorial Day weekend, we started with new dress shirts instead of the Polo shirts that they have worn since 2011,” Morris said. Most EMTs have the gray shirts and supervisors have white ones. “The new shirts look dressier, more professional. And the crews seem to want them.”