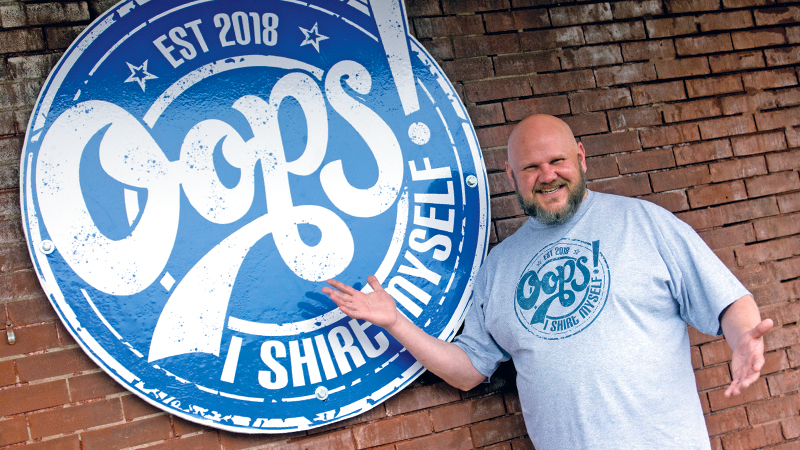 Sean Daniel, owner of the T-shirt company Oops! I Shirt Myself, shows off his new sign outside his business in Ironton. (The Tribune/Mark Shaffer)

Sean Daniel, the owner of Oops! I Shirt Myself, is a busy man.

And how many different designs is that?

He doesn’t know. He pulls up a computer file with the graphics of shirt designs. There are hundreds in the file.

Some are sports team shirts. Most are specialized to the customer, like one that has a unicorn and the name, Lily. That one was printed off in shiny, rainbow colors that look like glitter.

“This isn’t your typical shirt shop. I want people to come in and laugh as they are leaving. I want them to have a different experience,” Daniel said. “I don’t order any of my designs, everything is made here. So, if you can wait a day for me to get the T-shirt in, your choices are unlimited. It really is.”

Being a T-shirt designer and video commercial maker was not Daniel’s original career path. He was an electrical engineer but gave it up because it didn’t satisfy his creative urges.

“I was in industrial maintenance, doing wiring in a plant all the time,” he said. He didn’t like it that much so he went to Ohio University Southern and took the electronic media courses. He graduated and even worked as a special projects producer at the school.

Daniel says he gets a lot of his business from Facebook. Someone will post about having their design made into a T-shirt and he gets tagged in the posting.

People will send him the design, often from their phone. Like a guy on Tuesday, who sent a picture and asked him if he could do something with it.

“Two hours later, I had the T-shirts done,” Daniel said.

His studio is set up on the first floor of the former Goldcamp building. He has a machine that prints the designs, a heat press, a pair of computers and shelves with stacks of T-shirts.

Besides printing on T-shirts, he also does banners, posters, decal stickers, flags, hoodies, sweat pants “and a little bit of everything.”

Daniel said that he tries to have fun with the designs and his whole business.

“I mean, I named it Oops! I Shirt Myself. I didn’t expect anything to be serious,” he said. “The majority of my designs are funny, I think. But I will print anything that someone wants. I have yet to turn down a shirt. If I can’t recreate it exactly, my design will definitely pass their inspection.”

Besides running the T-shirt business, he also shoots commercials for Harley-Davidson shops around the country under the name Sean Daniel Media.

“They hire me for a couple of days and I go out to, say Las Vegas, and shoot enough footage for commercials for the season,” he said.

He started the T-shirt shop to have a business where he didn’t have to travel as much.

“I thought that I could bring my sense of humor to something,” Daniel said. “I do that with videos sometimes, but this is more of an immediate kind of thing.”

One of his missions is to have T-shirts with logos from Ironton’s past.

“You go to Gatlinburg, a race or a concert, you typically get a T-shirt,” he said. “I want to do that for Ironton and the area.”

One of the things that has attracted Daniel a lot of attention in the past few weeks is that he put up a big metal sign with his Oops! I Shirt Myself logo on the outside of the building.

“It’s been amazing. I thought I was set up well with Facebook. But so many people have told me they are happy to know where I am,” he said, laughing. “I’ve been here, but I guess people really know it now.”