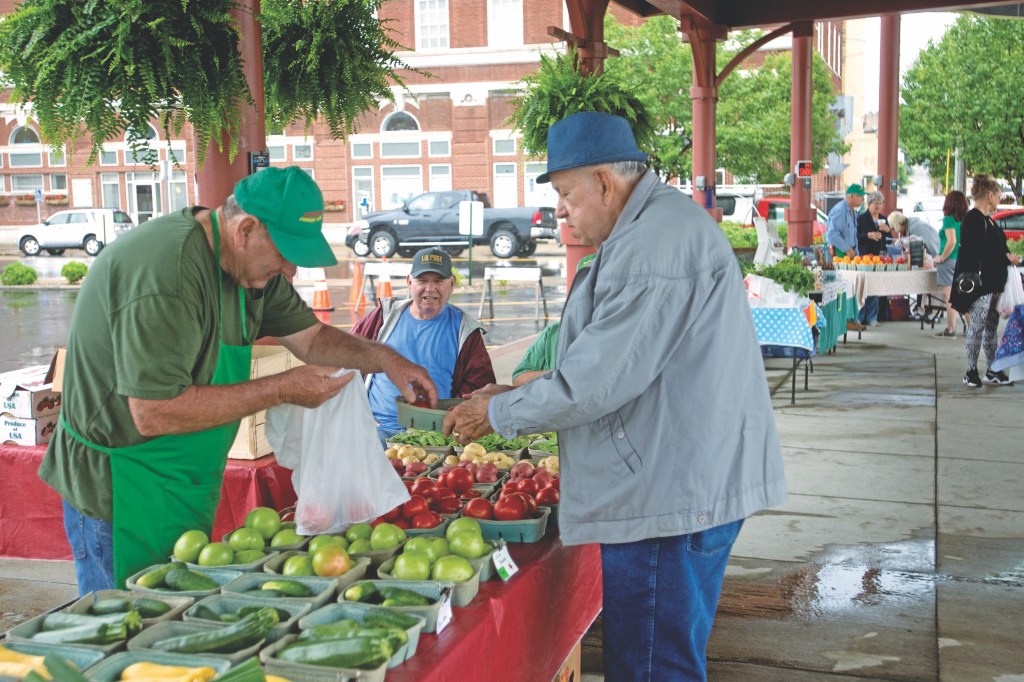 A little bit of rain doesn’t stop the people from setting up at the Ironton Farmers Market.

Despite overnight rains and a little drizzle, people were still coming out to buy fresh produce and other goodies available at Depot Square in Ironton. Vendors set their tables up under the pavilion and kept dry.

Ron Cochran was there to buy tomatoes from Roger Klaiber and check out when the locally produced green beans would be coming in.

Blue lake next week, half runners a week after that, he’s told.

Cochran was there for a simple reason.

“My tomatoes aren’t ripe yet,” he said. “I had some early growers but the groundhogs got into them and ate a bunch of them. I put up some wire yesterday, I should have put it up earlier.”

Cochran stops by the market at least once a week.

“It’s really nice,” he said. “I like the homegrown stuff, if I can find it. Most of the time it tastes better.”

Roger Klaiber, and his wife, Marta, of Ohio Furnace, have set up a produce stand at the Ironton Farmers Market since it began seven years ago.

“We don’t grow very much,” Roger explained. “It’s hard to gather it up, set up here and sell it too.”
“But it is all homegrown,” Marta said. “It’s local.”

The couple said they enjoy being there on Fridays and Saturdays.

“We like seeing the people,” Roger said. “And we get a roof over our head here. We started here and we just like it.”

“We’re retired and we have just been doing this for so many years, we have good customers,” Marta said. “We get out in the summer and enjoy it.”

Roger said that their biggest sellers are generally whatever is newly available.

“It’s tomatoes this week, because we just got the first homegrown tomatoes,” he said. “But everything sells pretty good. We haven’t got local beans yet, people have been asking for those.”

Tammy Hanshaw, of Pedro, was set up selling produce and hanging flower baskets. She too has been at the market since the beginning.

“We help people,” she said. “We like to serve people and it helps bring people in town to shop around and it brings people into Ironton to shop at the stores too.”

Hanshaw likes the social aspect too.

“People know you by name,” she said. “And people come in to to see what crafts are available. The more types of things we have, the more people stop by.”

Sam Heighton is the executive director of Ironton aLive, which puts on the Farmers market.

Heighton said that since Saturday is the second Saturday of the month, Ironton in Bloom would be setting up and offering dishes made from produce bought at the market.

“It’s going to be strawberry shortcake, so I think it will be crowded,” he said. “This is just a good place to shop.”

The Ironton Farmers Market is on Friday and Saturdays, from 7 a.m.-3 p.m., or until vendors sell out, at Depot Square on Second Street.

The Ironton Farmers Market is a project of Ironton aLive and sponsored by Our Lady of Bellefonte Hospital.