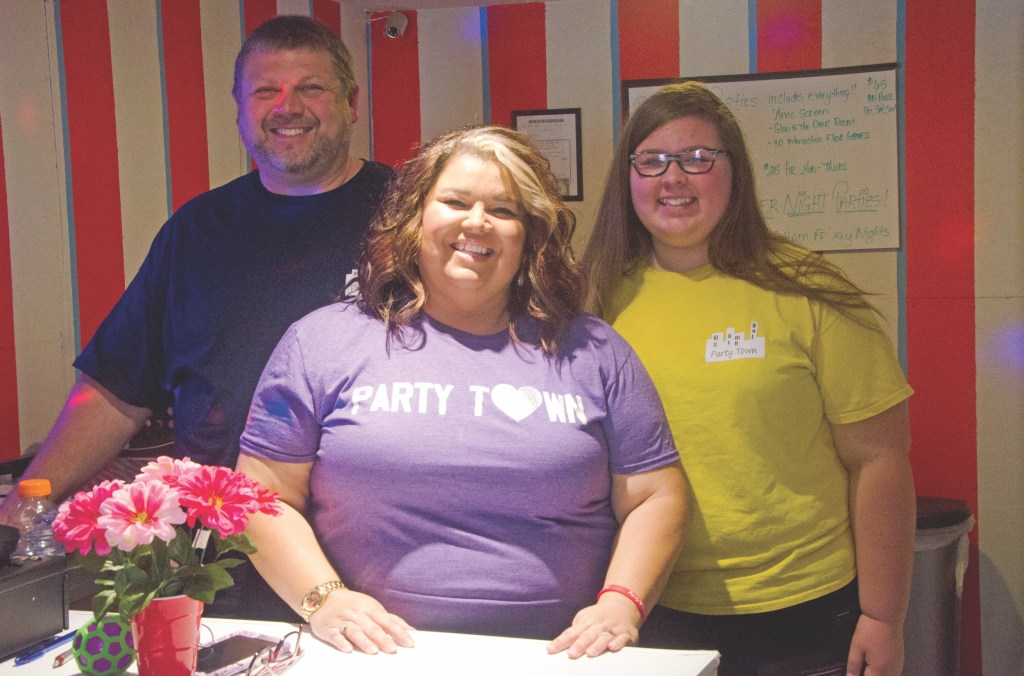 Dee Dee and Rusty DeLong, along with their daughter, Aryssa DeLong, opened the Party Town venue on Feb. 23.

HECLA — Dee Dee and Rusty DeLong said since they opened Party Town on Feb. 23, business has been strong.

“Every weekend we have been completely booked,” Dee Dee said. “But we still have openings going forward.
The family-owned and operated business, located at 24 County Road 7C, adjacent to Hecla Tanning, offers a space for birthday parties, dance parties, overnight parties, baby showers, receptions and anniversaries.
“Any kind of party,” Dee Dee said.

She said the venue can seat up to 50, but can hold 90. And they are flexible in their bookings.

“Any time someone wants a party, we’re available seven days a week,” she said.

Among the features of the venue are a glow-in-the-dark room, with games such as foosball, darts, bowling and cornhole. Dee Dee said this room, with its sound system,  can also be used for teen dance parties.

They also have a 3-D virtual reality projector, which allows up to 130 games to be played on the floor. A large, 120-inch projection screen is also available, which can be hooked up to laptops, Xbox and DVD players.

The venue can be rented and the DeLongs do clean-up afterwards.
“They take their stuff and we wipe down the tables and stuff,” Dee Dee said.

They also sell soda and candy, but allow for outside food to be brought in.

“They can bring in whatever food they like,” Rusty said.

Dee Dee said on Fridays, they offer a teen night, from 8-11 p.m., allowing them to come in and hang out.

“They can play games and dance,” she said. “It gives them a safe environment.”

Rusty said they have also hosted numerous fundraisers at the venue, most recently one for a two-year-old cancer patient.

“Anyone, like a school, trying to raise money, get in touch with us,” Dee Dee said.

She said they have recently added one new element to their business.

“We have singing telegrams,” she said. “We have a chicken and a gorilla, and they’ll deliver balloons, candy and flowers and sing and dance. It’ll be a lasting memory.”

She said she hopes the word spreads for their business.

“We hope people come out and see what we have to offer,” she said. “Anyone with party needs, get in touch with us.”