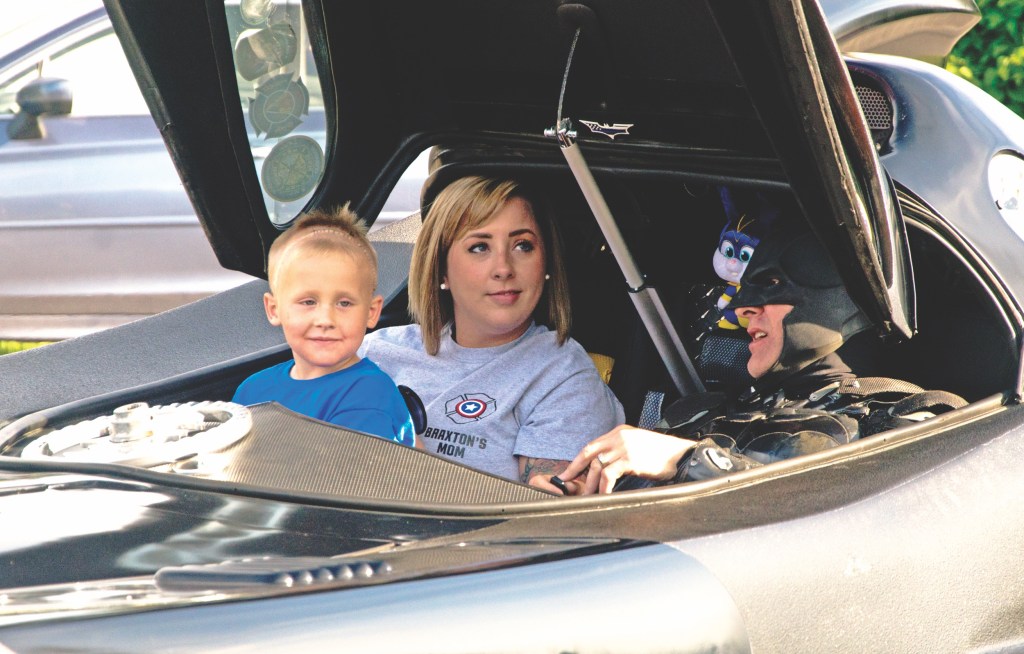 Braxton Vaughn, 5, of South Point, rides with his mother, Marissa Matt, in the Batmobile on Tuesday, along with local Batman John Buckland of Heroes 4 HIgher. Vaughn has been diagnosed for a second time with cancer and is undergoing chemo on Friday. (The Tribune/Heath Harrison)

FAYETTE TOWNSHIP — “This is all for you,” Marissa Matt said to her son, Braxton Vaughn.

The family was standing along County Road 1 in front of the Fayette Township fire department as a parade of fire trucks, police cruisers and EMS vehicles made its way up the road.

Braxton, 5, the son of Matt and Scott Vaughn, of South Point, is student at the Burlington preschool. He was diagnosed with a brain tumor in 2017 and underwent chemotherapy.

Matt said Braxton’s cancer has returned and he recently had surgery, and is set for more chemo on Friday, and possible radiation treatment.

The event, organized by the Fayette Volunteer Fire Department and the Concerned Citizens of Burlington, was a show of community support for the boy, with multiple fire departments taking part in the event, which also served as a fundraiser.

It was a surprise for Braxton, who loves fire trucks.

And following the fire trucks was another of his favorites, Batman, portrayed by Heroes 4 Higher’s John Buckland, of Huntington.

“He loves Batman, and all the Avengers characters,” Matt said.

Buckland, who frequently visits children in hospitals and schools, pulled into the fire station in his replica of the 1989 Batmobile.

“I haven’t seen you in a while,” he said to Braxton.

He then proceeded to present Braxton with several gifts, including a Batman blanket, a replica Batarang and posters, bearing the slogan “Tough things make us stronger.”

He said when the boy was feeling better, he could distribute them to other children in the hospital.

After presenting the gifts, he then gave Braxton a ride in the Batmobile, accompanied by his mother.

When they returned, Batman said he had talked with the boy and they had come up with a slogan.

Many in the crowd wore shirts reading “#BraxtonStrong,” the hashtag associated with his cause on social media.