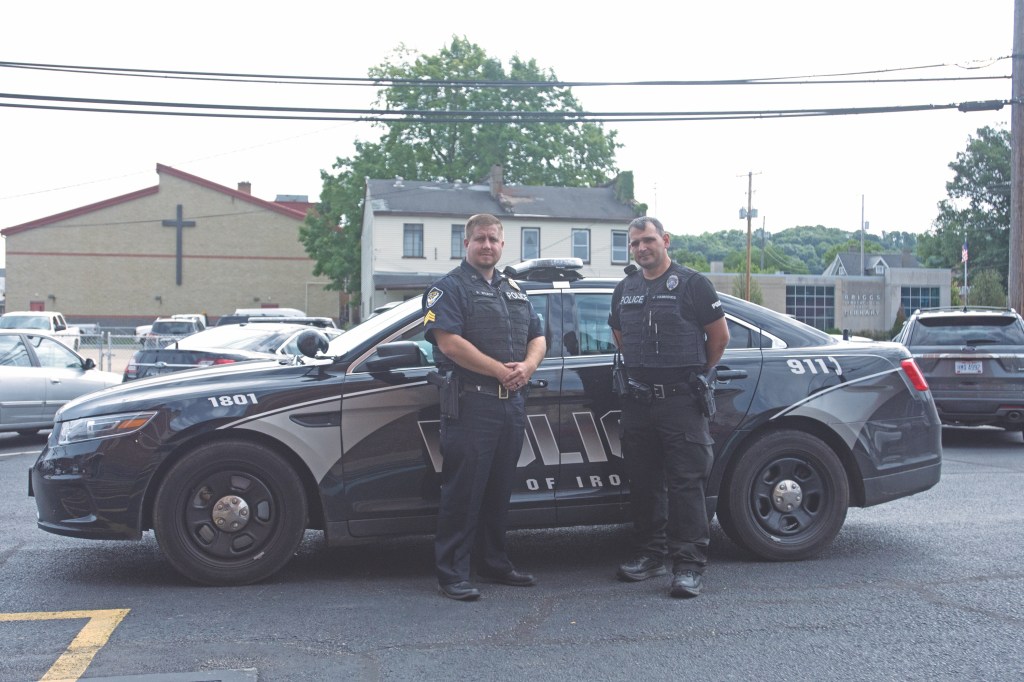 On Wednesday morning, Ironton Police Department Sgt. Steve Wilson and officer John Hammonds showed off the new body armor vests the department recently received. The IPD got 15 new vests that were paid for by a combination of community donations and state grant money. (The Tribune/Mark Shaffer)

That’s because all 15 officers, including the K-9 unit, Goose, have recently been equipped with new, updated body armor vests. The canine’s vest did not come from grant money, rather it was donated to him.

“We want to protect Goose, he’s a valuable member of our department,” Wagner said. “And when you work in law enforcement, you could be a target, especially with the political climate. In the area we live, we are very fortunate that we have not had issues like some of the big cities have had. But this is emergency services, you just never know.”

In total, the vests cost a little over $19,000 and were paid for by a combination of donations from the community that were used as matching money to go with grant money from the Ohio Attorney General’s Office and the Ohio Bureau of Workers’ Compensation’s Ohio Law Enforcement Body Armor Program

The last time the department got new vests was 14 years ago when the Friends of Ironton purchased them.

Wagner was still using the vest she got when she started in law enforcement some 30 years ago.

The concern is that the plates in the vest meant to protect the wearer have an expiration date and it may not be as effective as needed in a bad situation.

Wagner said she was impressed by the community outpouring of support.

“All kinds of people donated,” she said. “One of the major donations came from American Legion Post 433 Riders. And then we got all kinds of donations from businesses. And there were a lot of people who made donations but didn’t want us to publicize who they were.”

Wagner said the department set up a specific account, with the help of the city’s Finance Department, to accept donations.

“The Lions Club, the Rotary Club, the Elks, the Lawrence County Memorial Day Race Committee, many of our businesses, they have just stepped up and helped us,” Wagner said. “Our community partners, I just can’t say enough good things about them.”

She also credited Sgt. Anthony Forest and Captain Dan Johnson for getting the vests.

“Captain Johnson worked diligently to get that grant and Sgt. Forest approached some of businesses about donations and worked closely with the Legion Riders,” she said. “Both of those officers stepped up and they have worked diligently with our community.”

Last year, they drew from the donation fund to get stick-proof gloves and chemical resistant gloves for all the road officers. The gloves are for when they might encounter needles or unknown chemicals.

Wagner said the next thing the department is working toward is upgrading their radio equipment.

“A lot of it is antiquated, most of it is  from before I was even hired on,” Wagner said.