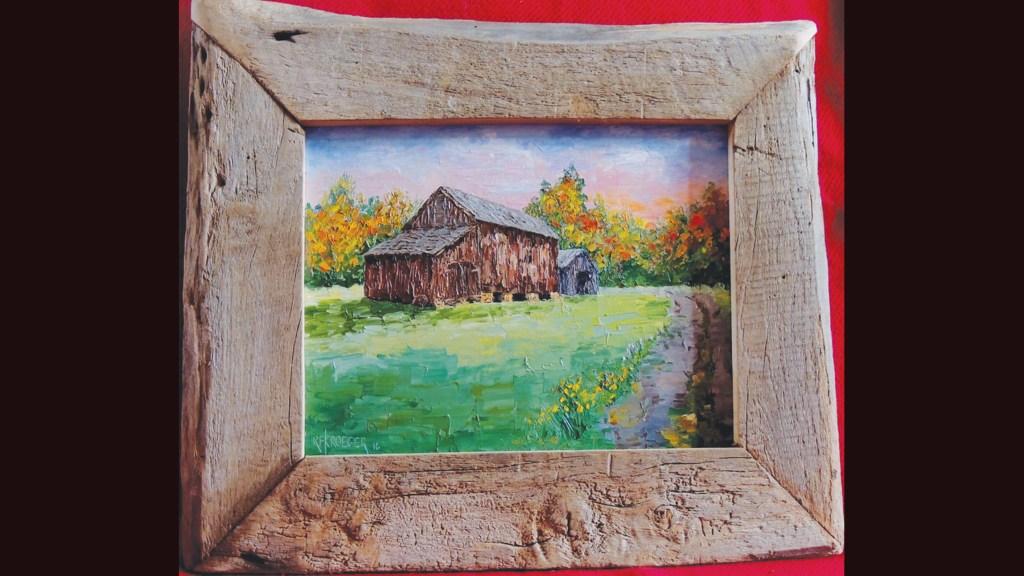 Submitted photo Artist Robert Kroeger is seeking locations in Lawrence County for his Ohio Barn Project, which documents old barns, from the 1800s through about the 1930s in a series of oil paintings.

CINCINNATI — Artist Robert Kroeger has said he is interested in preserving the history of Ohio barns and farms.

“There’s so much old history and these old barns are disappearing,” he said, adding that he’s interested in the stories told around them.

In 2012, he started traveling the state, hoping to document a barn in each of the state’s 88 counties for the Ohio Barn Project.

“Old barns are disappearing quickly, and along with them, pieces of our past,” he said. “I’m hoping to preserve some of this vanishing landscape.”

This fall, he will be making a tour through southeast Ohio, including Lawrence County and he is hoping to hear from those who know good locations in the area for his paintings.

In addition to art, Kroeger is also a writer and he interviews the families and owners of the barns for an essay for the project about their history.

“The families know of something that happened there long ago,” he said.

Kroeger said he will visit the location and determine the best angle and make series of sketches, and takes photos. He often gives a small, complimentary study piece to the owners.

Then he begins his painting, which he does with palette knives, rather than brushes, and oil on panel.

He said he works rather quickly, and his method produces a finished piece in about five hours.
He uses the impasto, wet-on-wet method, layering paint on thickly for the pieces.

Kroeger said, in addition to Ohio, he has also worked on barns in Kentucky and Indiana. A dentist, he is also a second generation artist, after his father, and has produced hundreds of painting of various subjects over his lifetime.

He said he also works with groups such as local historical societies and 4-H clubs and has organized fundraisers for them around his tours.

Kroeger hopes to finish the project this year and he has 27 counties to visit.

In October, he said he will be visiting Lawrence, Gallia, Mason, Athens, Meigs and Scioto counties.

He said those who would be interested in taking part in the project or suggesting a barn can reach him through the contact form on his website at www.barnart.weebly.com.