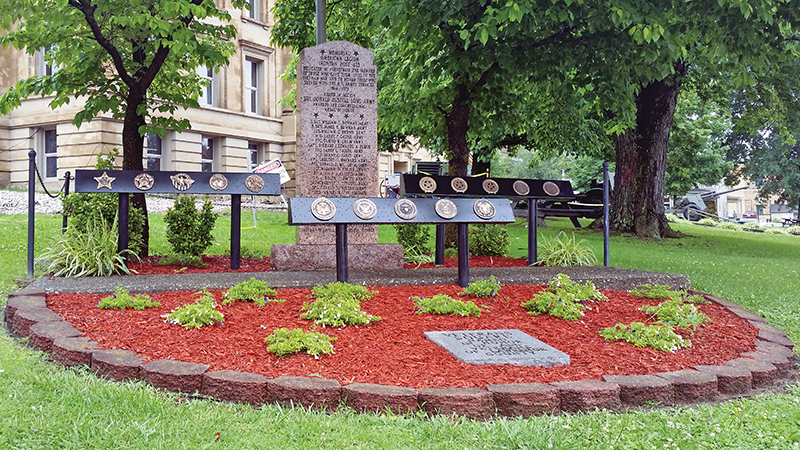 The Veterans Square memorial honoring Lawrence County veterans on the lawn of the Lawrence County Courthouse was recently upgraded with new displays for military emblems, flowers, mulch and paving stones. It is located at the intersection of Fourth and Center streets in Ironton. (The Tribune/Mark Shaffer)

If you have been by the Fifth Street side of the Lawrence County Courthouse, you probably have seen the lifts for crews working on the face of the building and removing green paint from the tower.

You may have not noticed on the corner of the lawn at the intersection of Fourth and Center streets, that the memorial honoring Lawrence County veterans has undergone a transformation.

Tim Carpenter, the Lawrence County Veteran’s Service officer, said that Veterans Square said he spearheaded the improvements, a project he has wanted to do since he joined the office three years ago.

“I just didn’t like how it was done before, with the flags all different levels. It was such a hodge podge,” he said. He got approval from the Veterans Service Commission and then contacted Collins Career Technical Center to have instructor John Cyrus and his RamTech class fabricate new metal displays.

“I gave them a brief description of what my vision was and they did the rest,” Carpenter said.

There are three metal displays with the emblems for five branches of the U.S. military and emblems to represent the conflicts that Ohio and Lawrence County have been involved in, from the Civil War on.

New mulch, flowers and paving stones were put in around the displays and a granite marker that lists all the Lawrence County veterans who perished in Vietnam. That was put in by American Legion Ironton Post 433.

Carpenter said the response from the community has been very positive.

“People have said they really like it, they say it looks much better than it did before,” he said.

Carpenter said that Veteran’s Service Office paid for much of the cost.

“But the kids from Collins Career Technical School donated their work,” he said. “We purchased the materials. It was a very inexpensive project. So, Mr. Cyrus and his kids in the RamTech class did a really good job on that.”

“The Lawrence County commissioners approached me about doing a veteran of the year,” he said. “It is on our Facebook page, you can go there and download the guidelines for nominations. The deadline to have the packets in is July 15.”