Shaking it up: Shake Shoppe has new owners 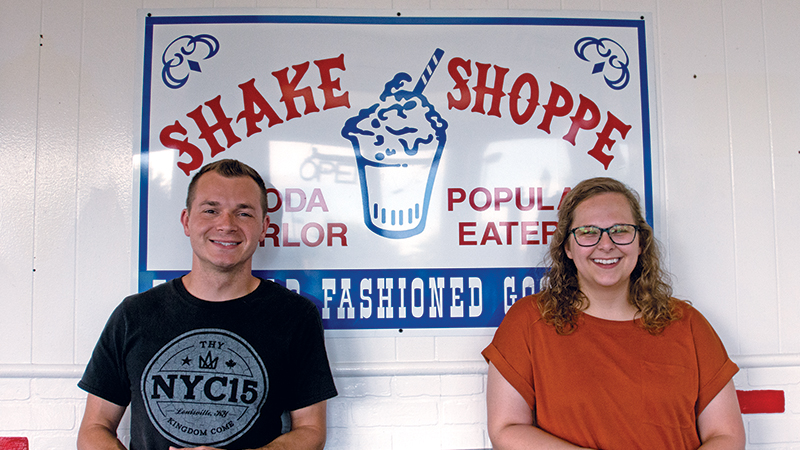 Maddie Cogan and Robby Brown recently bought Ironton’s Shake Shoppe and are planning to have it re-opened by the Fourth of July holiday. (The Tribune|Mark Shaffer)

The Shake Shoppe in Ironton is under new ownership.

Robby Brown and Maddie Cogan bought the long-time business and are in the process of doing a little bit of work on it.

Brown has worked in the food industry for a long time. While attending high school and getting his undergrad degree, he worked at the Snak Shak in South Point.

“I enjoyed the restaurant business. I enjoy the people side of it, especially,” he said.

For the last two years, he has worked as the manager of a café that is an outreach of a church in Beaver Creek. “That really solidified my interest in the restaurant industry.”

They found out the Shake Shoppe was for sale because the previous owners had decided to sell it after they had a new baby and felt they didn’t have enough time to run a business too.

Cogan, who works at Chik-fil-A and recently graduated from Mount Vernon Nazarene University with a public relations and marketing degree, said that she was a little cautious about buying the business but once she saw the patio and everything, she was in.

Cogan said they aren’t sure how long the Shake Shoppe has been around.

“It was sometimes in the 1950s, maybe the 40s,” Brown said. “We haven’t got an exact date. I found an article when they were franchising in the 1960s but the one here and the one in Portsmouth pre-date that.”

They don’t have a firm opening date yet, but they are shooting for re-opening it before the Fourth of July holiday.

Brown said they don’t plan to change much.

They have replaced tables with booths and put in a concrete ramp to help people get inside the building, but much of it will not be changed.

“There will be minor changes to the menu, but the bulk of it will remain the same,” Brown said. He added the shake recipes would be the same as will the hot dog sauce. “We plan on buying top quality ingredients, we don’t want to cut costs, that cuts taste. We want to make sure quality stays high.”

And after numerous inquiries, Brown assures everyone that they will indeed continue to carry the Shake Shoppe’s beloved salted, roasted pecans.

“Those are on their way now,” he said. “So people can be assured the pecans they have grown to love will stick around.”

They are also keeping the Shake Shoppe signs.

“We don’t want to change that because it has been a staple in town for so long,” Brown said.

“We want to improve the outdoor seating,” Cogan said. “We might have patio games, like cornhole. Something fun.”

Cogan said that as someone with a marketing background, her big thing is hospitality.

“We want to create a culture of ‘Yes, let’s go to the Shake Shoppe, it’s a fun place to be,’” she said. “We want to have employees who smile and have good energy.”

Brown said they do have more plans for the future, but they don’t want to say what they are just yet.

“We want to keep the traditional food, but we have food ideas that we will be getting in the next few months,” he said.