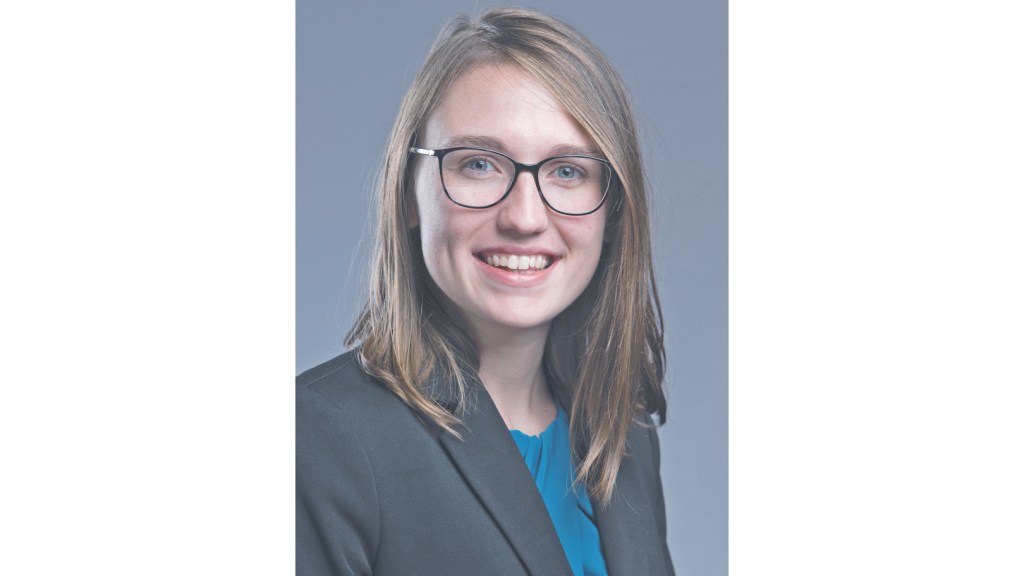 For one Ohio University Southern grad, her career goals are coming true.

Before graduating Russell High School, Ambrosia McKenzie decided that she wanted to be a lawyer and to serve her country.

After graduating from OUS in 2018 with a double major in mathematics and history, she headed to the University of Cincinnati College of Law and expects to graduate in 2021. She also works with the Ohio Innocence Project, which is based out of UC Law. She said the program has seen 28 innocent men and women who were wrongfully convicted released from prison.

Her main goal has been to pass the bar exam and join the U.S. Air Force to become a member of the Air Force’s Judge Advocate General’s Corps. She recently took a big step towards that goal.

“I applied to and was accepted into the Graduate Law Program for Air Force JAG,” she said. “As such, upon graduating and passing the bar exam, I will go on to work as an attorney for the Air Force.”

Deborah Marinski, Ph.D., academic division coordinator and associate professor of history at OUS, said she has complete faith that McKenzie will be successful in law school and in JAG.
She called McKenzie one of the best students she’s had the pleasure of teaching and not just because of her advanced academic abilities “but also because of her dedication to her education and her determination to achieve her goals.”

Marinski said despite overcoming difficult circumstances in order to go to college,
Coming from a low-income family, some of McKenzie’s toughest barriers revolved around money.

“During the majority of my time at Southern, I worked three jobs to make sure I could pay my bills,” she said. “This was not always easy, but I quickly learned how to manage my time (and) after years of hard-work, my dreams are finally coming true.”

“She always kept a positive attitude toward courses, other students, and her professors and was fun to have in class,” said Marinski.

McKenzie credits her former professor with instilling the rigors of class preparation and the Socratic Method, which is used in law school and that her best preparation came from the many history classes she took with Dr. Marinski.

“Not only were (they) challenging, but they also required (me) to have fully read and understood the material,” she said.

One of McKenzie’s job was as a OUS student employee working in assignments in the Dean’s Office and in the Student Resource Commons. She was supervised by Robert Pleasant, associate director of SRC.

“(He) helped to build my work ethic and taught me how to efficiently balance my time, a take-away that has been essential for law school,” she said.

In reflecting on the capabilities of his former student worker, Pleasant said he was proud of her and that she is going to be an asset where ever she is.

He added she has “the kind of personality, ambition and something extra that’s positive to be around.”

Her pursuit of higher education led McKenzie to personal discoveries as well as academic success. In chasing her dreams, she has learned “anything is possible so long as you put in the effort.”

McKenzie offered advice to those from the Tri-State about pursuing their goals.

“I recommend…not being afraid to step out of your comfort zone,” she said.

She encourages others to listen and learn from the real-life experiences of others.

“Never be afraid to ask questions,” said McKenzie. “Generally, people are willing to answer and jump at your eagerness to learn.”

With her law degree anticipated in about two years, McKenzie is already planning for her future post-JAG program completion.

“In the future, you will be able to find me on an Air Force base somewhere, hopefully in Germany,” she said.