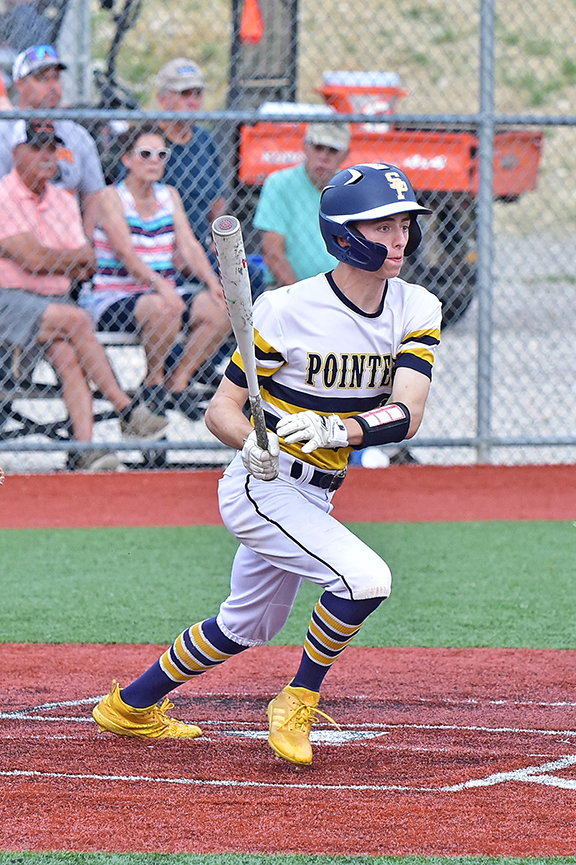 SOUTH POINT — Righty tighty. Lefty loosey.
That’s a little way to remember which way to turn a knob or screw to tighten or loosen it.
But for Drew Smith as a hitter, right is reliable but left is limitless.
Smith changed his fortunes when he changed his hitting from the right side to the left as Pointers’ head coach Larry Goodwin’s son Jack helped make the adjustment.
“The amazing thing about Drew is that he batted right-handed as a freshman and sophomore and he batted left-handed his junior and senior years,” said Goodwin.
“My son, Jack, identified in the cage one day that Drew had a good lefty swing. Jack worked with him and Drew remained a lefty. Jack’s a really good hitting instructor.”
The two-and-a-half foot move from one side of home plate to the other batter’s box proved to be very productive. In fact, it led to Smith earning All-Ohio honors this season by both the Ohio Baseball Coaches Association and Prep Baseball Report.
“I always had a desire to hit both ways. Even when I was little, I tried it out and I got a lot of fun out of it,” said Smith.
The Pointers’ senior outfielder added another award on Tuesday when he was named to the Prep Baseball Report Division III All-Ohio team as an honorable mention selection.
Smith batted .373 on the season with four doubles, three triples 23 runs scored, 22 runs batted in, 12 stolen bases and nine walks.
His 37 career stolen bases rank second on the Pointers’ all-time list — just five off the record.
He was earlier named to the Ohio High School Baseball Coaches’ Division III first team all-district team and honorable mention All-Ohio. He was also first team All-Ohio Valley Conference.
Smith — who was second team all-district as a junior — said he never expected to get so many postseason awards.
“Not really. I was hoping to get the All-OVC and maybe the district. I didn’t know anything about all-state. That was surprising,” said Smith.
Goodwin said Smith has improved each year and thinks he could play for a college program.
“Drew could definitely play at the next level, but he plans on attending Marshall University and concentrating on his education,” said Goodwin.
“He’s a very mature, responsible young man. It was a pleasure to coach him the last three seasons.”
Smith said he plans to major in engineering and wants to devote his full attention.
“It would be cool to play, but I want to focus on my education,” said Smith.
Besides baseball, Smith was first team All-OVC and first team all-district in soccer. He was second team all-district in soccer his junior year.
“For me, it’s hard to pick (one sport over the other). It’s whatever mode I get into for that season,” said Smith. “I like working for whatever season that pertains to me.”