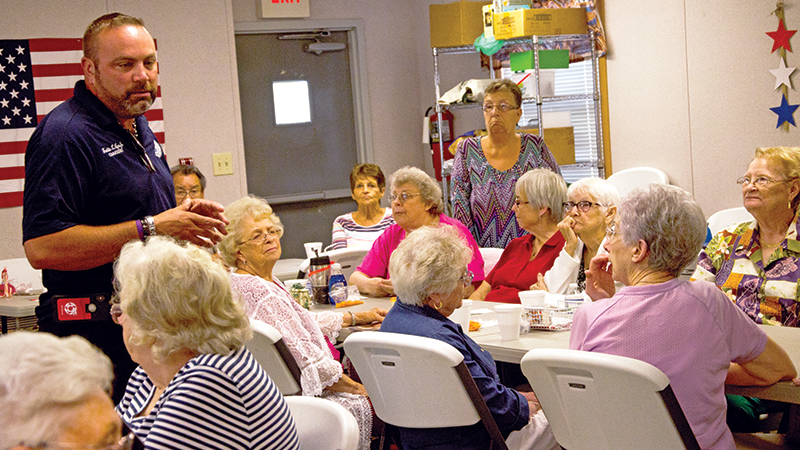 Lawrence County Commissioner Freddie Hayes Jr. discusses the upcoming construction of a new senior center at the Lawrence County Fairgrounds with members of the Sybene-Chesapeake Senior Center and director Darlene Green in 2018. (The Tribune|Heath Harrison)

CHESAPEAKE — Lawrence County Commissioner Freddie Hayes Jr. provided members of the Sybene-Chesapeake Senior Center with an update on Friday regarding plans to build a new senior center and EMS station at the Lawrence County Fairgrounds.

It is a long-sought project for members of the center, who are currently housed in a modular unit at the Chesapeake Senior Center.

Hayes and his fellow county commissioners, working with Rep. Ryan Smith, R-93, were able to secure $1M in funding last year from the legislature for the new building.

The funds will also be used to pay off the loan on the barn at the fairgrounds.

“We’ve finished the appraisal and finished the survey,” Hayes said. “The money will come through Ohio University and, as soon as we get the deed to the property, we can begin construction.”

Hayes said he expects this to take place sometime after next month’s Lawrence County Fair.

“We’re very close and hopefully, we can have some sort of groundbreaking in 30 days,” he said.

Hayes said he has been working with Bill Dingus, of the Lawrence County Economic Development Corporation on the project.

He said that he and Dingus are also working on getting a 14-passenger bus for the center, which would be 90 percent paid for, so long as the center uses it for 10,000 miles a year.

“That will be no problem,” Darlene Green, the center’s director said.

Hayes said any rumors that the center was not happening were untrue and assured the room that things are on track.

“When you’re dealing with the government, there are steps you have to go through,” he said. “But is going to be built.”