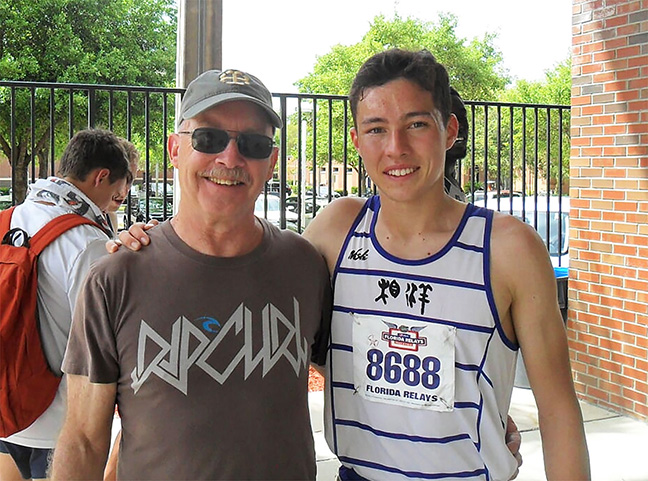 Ironton resident Jim Clay (left) got to spend some time with his grandson Allon Clay during a meet in Florida. (Photo Submitted)

Like father, like son, like grandson.
Jim Clay was a speedy player during his high school days at Ironton St. Joseph Central Catholic as he enjoyed a good career.
Jim Clay’s son Andrew Clay was also pretty fast when he attended St. Joseph and performed well.
Currently, Andrew is stationed in Japan and is with the United States Navy as a Master Chief Petty Officer and member of the Helicopter Maritime Strike Squadron.
That’s impressive enough, but his grandson Allon is beginning to upstage both father and grandfather when it comes to speedy times.
Allon is one of the top distance runners in Japan. His recent time of one minute and 46.59 seconds was a new Japan record for U20 Japan // U18 Japan // High School Japan in the 800 meter run.
If Allon can slice another 1.59 seconds off his time, the 17-year-old could qualify for the Olympics.
Allon is already hearing from college track coaches including Tennessee.