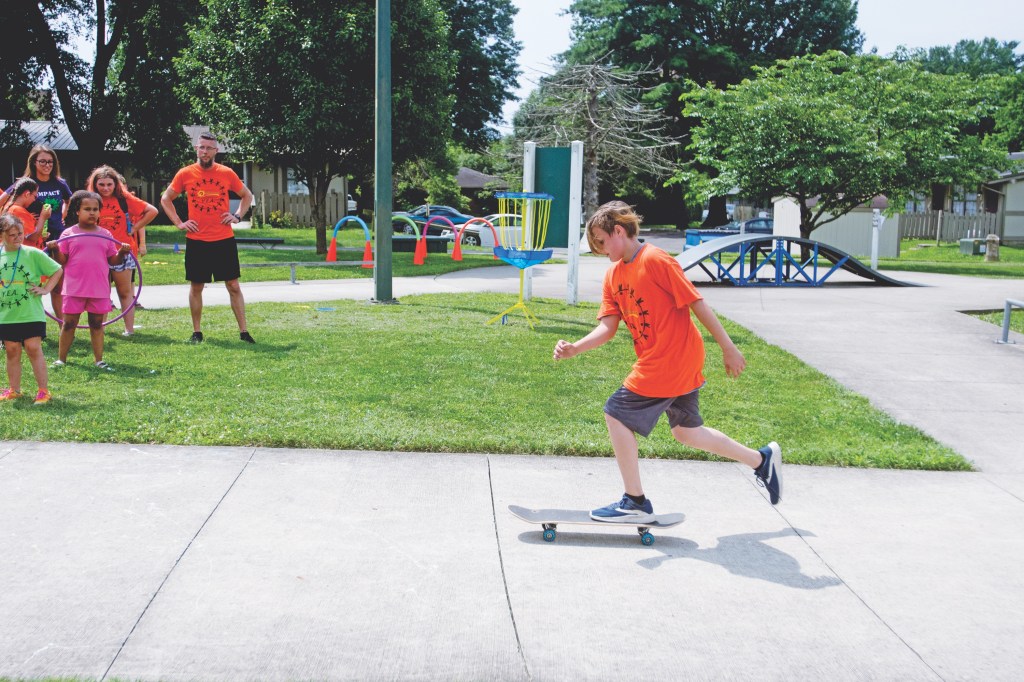 Jacob Smith, of Ironton, shows off his skating skills during a Parks Alive event for children at Etna Park on Tuesday. (The Tribune/Mark Shaffer)

On Tuesday, kids gathered at Etna Park in Ironton to show off their skating skills, play a game of giant checkers, meet some Disney princesses, show off their skills on an obstacle course and learn why it’s healthier to drink water rather than sugary drinks. They also had pizza and learned about the benefits of exercise.

It’s was all part of Parks Alive’s three days of activities at the park and it was put on by Impact Prevention, Riverhills Prevention Connection Coalition and Ironton aLive.

Susan Heald, of Impact Prevention, explained that this was the second year they had put on the event.

“We are here once again, providing an opportunity for community connectiveness,” Heald said. The park was selected because there are a lot of kids in the neighborhood. “We had a lot of walk-ins on Monday. We had a few less today, but still there are a good number here.”

Besides the games, there were several booths with information of interest for kids and families, from the Lawrence County Early Childhood Academy, WIC, The Ohio State University Extension Office, Ironton and the Lawrence County CAO’s Family Health Centers.

“We’re having a lot of fun,” Heald said, adding that their goal is to create a connection among the community and give kids a chance to get out of the house. “We want them to talk to other children, get physically active and give their eyes a rest from television and video games. It’s just really important for kids to move and talk to other kids and adults. And they are getting support and reinforcement for what they are doing.”

Today will be the final day for the event at Etna Park, located at North Fourth and Etna streets in Ironton. It will run from 11 a.m. – 2 p.m.