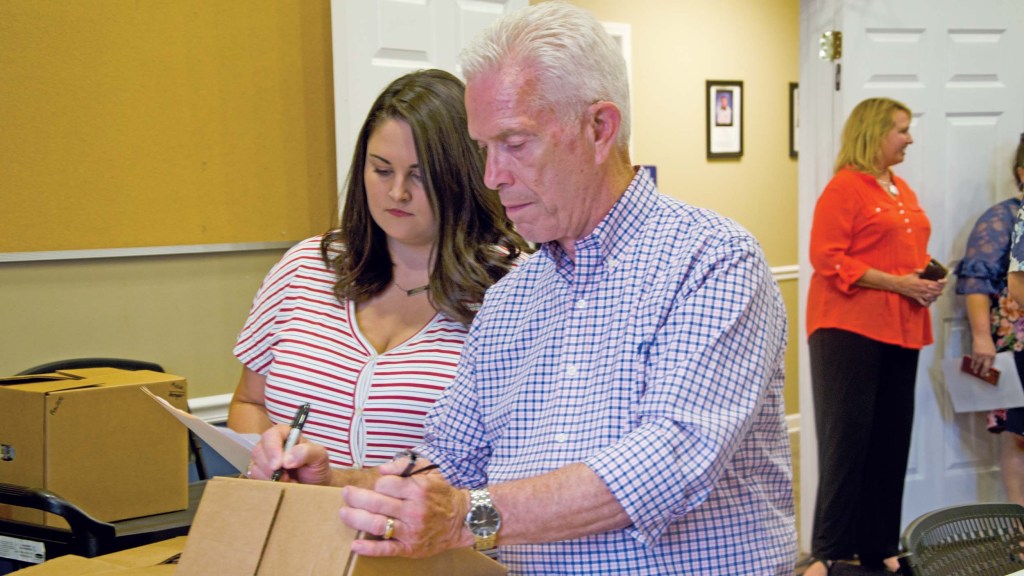 The Tribune/Heath Harrison U.S. Rep. Bill Johnson, R-Ohio, and Lauren Beam, of Necco, label boxes of food on Tuesday to be sent out as part of the rural food delivery program.

Johnson assisted in labeling boxes and loading a car for the effort, which feeds provides food to 193 children in Lawrence County during the summer months.

According to Elizabeth Cremeans, director of family counseling and community services for Necco, the food is distributed to families that meet income requirements. The program began in June and will run through August.

Cremeans said Necco has partnered with Dawson-Bryant schools for the effort and that superintendent Steve Easterling and Ellen Atkins, of the district, have been a help in volunteering.

Susan Rogers, the regional manager for Corporation for Appalachian Development/RSVP of the Ohio Valley, said the program is funded through the state and began eight years ago under Gov. John Kasich.

“It helps kids who live out in the country,” she said, stating that many are in need of food in summer months. It is open to all children from birth to 18 years of age.

Denise House, administrative specialist for Necco, said the goal is to have 200 children signed up by the end of the week.

“We sign up whoever qualifies and we try to feed as many as we can,” she said.

They said they invited Johnson to make him more aware of what the program involves.

Johnson’s office said the visit is also part of a volunteer pledge he made in January. Beginning on Martin Luther King, Jr. Day, the congressman planned to volunteer and serve in all 18 counties he represents.

Johnson said he grew up on a farm and understands the need for the program in rural areas.

“I know what it’s like to go without,” he said.

He said the program was “critically important.”

“This is a great example of communities coming together,” he said.

Cremeans said there is still time for residents to apply for the program and that they can stop by Necco’s office, if interested.