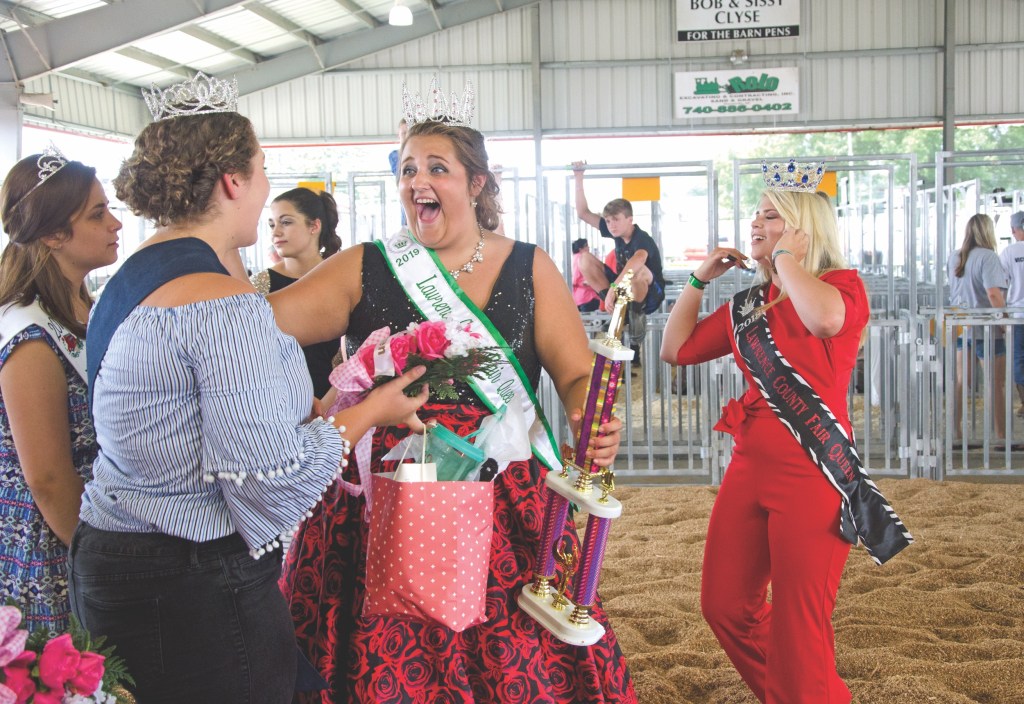 The fair queen and princess pageant took place in the main barn and Morgan Klaiber, a 2019 graduate was crowned queen, while Brea Belville, a sophomore at the school, was named fair princess.

Six entrants competed and Klaiber’s excitement was infectious when she won and was crowned by last year’s queen, Montana Runnels.

“It’s awesome,” Klaiber said. “I’m so happy I cried. It’s been a dream of mine to be fair queen since I was a kid, and that dream just came true today.”

The daughter of Matthew and Lee Ann Klaiber, she was first runner up for princess in 2014. Klaiber is the second queen to come from her family. Her older sister, Matison, wore the crown in 2017.

Klaiber had previously won reserve champion for her lamb and took the grand champion trophy in the feeder calf competition. A member of Gingham & Denim 4-H Club and Symmes Valley FFA, she said she will be attending Ohio University Southern in the fall and studying early childhood education.

Following Klaiber was Maddy Calaway, of Getaway Go-Getters 4-H Club and of Symmes Valley FFA. It was her second year as first runner up for queen and she was fair princess in 2017. Rounding out the top three were Kaylee Cade, of Country Clan 4-H Club.

There was more competition for fair princess, with 11 entrants in the pageant.

Belville, a member of Starlite 4-H Club, said she has been involved in the fair for some time.

“I’ve been doing this for seven years,” she said.

The daughter of Shannon and Brigette Belville, she was first runner up for princess last year and won junior showman in the breeding rabbits competition.

“I feel very blessed,” she said of her win on Sunday.

Coming in as first runner up was Enola Cade, a member of Country Clan 4-H Club, while Willow Maynard, of Willow Wood Wranglers, was second runner up.