Hiding a secret: Walters didn’t think he could compete in demolition derby; his fellow built him a car 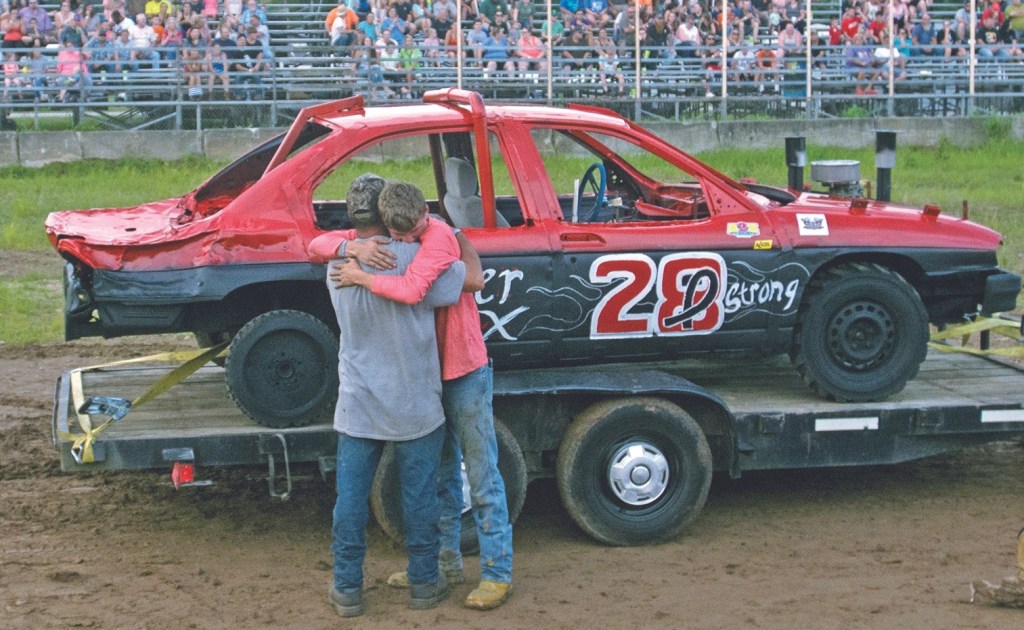 Levi Walters hugs his father, Jason Walters after Levi was presented a car for next Saturday’s demolition derby. Several of his fellow derby drivers spent six months secretly building him a car since he was unable to build his own as he underwent chemotherapy. (The Tribune|Mark Shaffer)

ROME TOWNSHIP — It took a lot of secrecy and a couple white lies, but a group of guys managed to hide a big surprise for the better part of six months.

For the first time in years, it looked like Levi Walters wasn’t going to compete as a solo driver at the Lawrence County Fair.

He had competed in the demolition derby for the past six years, the first time when he was just 14 years old. But this past year, he had found out he had melanoma cancer and would have to undergo chemotherapy. He didn’t have time or money to work on getting a car ready. So, he was going to settle for being part of his family team, The Federal Creek Boys, with his dad, Jason, and his brother, Ty.

Or at least that is what he thought.

On the opening night of the fair on Saturday, the guys who had competed against him for years had a big surprise for him — a Lumina that had been modified for the derby, painted black and red, with the number 28 and a cancer ribbon on the doors and a motto to sum up Walters’ fight against his disease, “Cancer Sux,” on the back side panel.

Levi was totally surprised and had to wipe away more than a few tears on his T-shirt as he found out the car being hauled onto the muddy field was for him.

He hugged Chris Webb, of the Mangled Metal Mafia team who had helped build the car, and then checked out his new car for next Saturday’s demolition derby with his dad, his mother, April, and his brother.

“I’m surprised,” Levi Walters said. “They didn’t have to do it. It means a lot, I didn’t think I was going to get to run next weekend, now I am.”

April Walters said she was ecstatic.

“God just works miracles,” she said. “It has been tough seeing him going through this but he is a fighter.”

Webb said the car was built over six months in secrecy.

“Levi has been a good friend of ours,” Webb explained, adding that he had retired from demolition derby for a couple of years and the Walters family helped get him back into the competition and that helped draw them all closer.

He said he was shocked when Levi texted him and said he had been diagnosed with melanoma cancer and wouldn’t being competing solo this year.

“Several Lawrence County drivers got together and we decided we were going to build him a car since he was going to be tied up taking chemo,” Webb said. Levi’s dad, Jason, already had a car they were going to use before the cancer diagnosis came. Jason Walters fibbed to his son that he had sold the car. Instead, around 10 of the drivers took the car and spent six months working out it at Webb’s garage.

And they managed to keep the surprise a secret from Levi Walters.

“We had to lie to him like crazy,” Webb said, with a laugh. “We hope he’s going to be excited.”

Levi Walters will run the car in the demolition derby on Saturday.

Webb said the demolitions are really just one big family.

“We have teams but, when it comes down to it, we are all in the pits helping each other,” Webb said.

Levi Walters said it was fine that everyone hid the car from him and he happy to be competing next week.