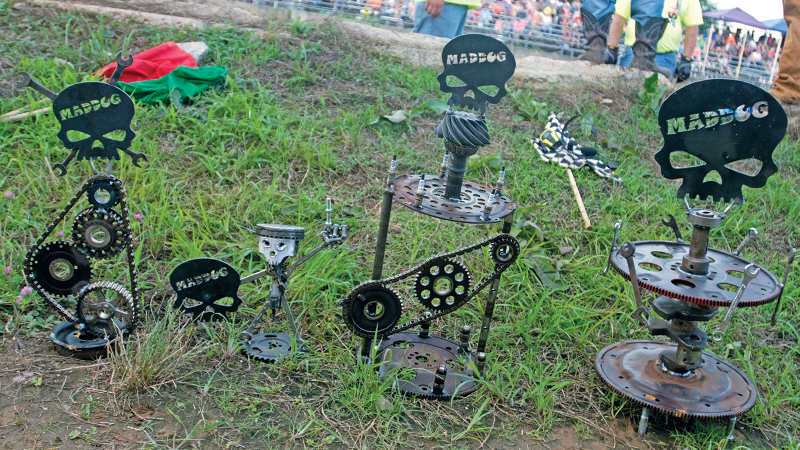 These four ‘mad dog” trophies made out of car parts and tools were created by Travis Rice, of Hamilton, to be given to the craziest demolition derby drivers at the Lawrence County Fair on Saturday. (The Tribune|Mark Shaffer)

ROME TOWNSHIP — Not all the trophies handed out at the Lawrence County Fair are for being the best in class. Some very unique ones are given out for being a crazy driver.

On the edge of the mud pit for the demolition derby on Saturday, behind a concrete barrier, were five unusual trophies. Instead of molded gold plastic, these awards are made out of car parts including various sizes of gears, chain, crankshaft, spark plugs and tools such as sockets and wrenches, all welded together and topped with a skull.

The trophies weren’t for the best driver; they were for the craziest drivers who raise a ruckus and puts on the biggest show during the demolition derby.

Travis Rice, of Hamilton, has been making the trophies for the past three or four years.

“I build derby cars,” he said. “I’m usually the one who goes for mad dog at any other derby, so I built these for the mad dogs at this fair.”

He said he enjoys watching a good derby with drivers that put on a show and make it a spectacle, “so I figured they deserve something.”

Getting back on the road