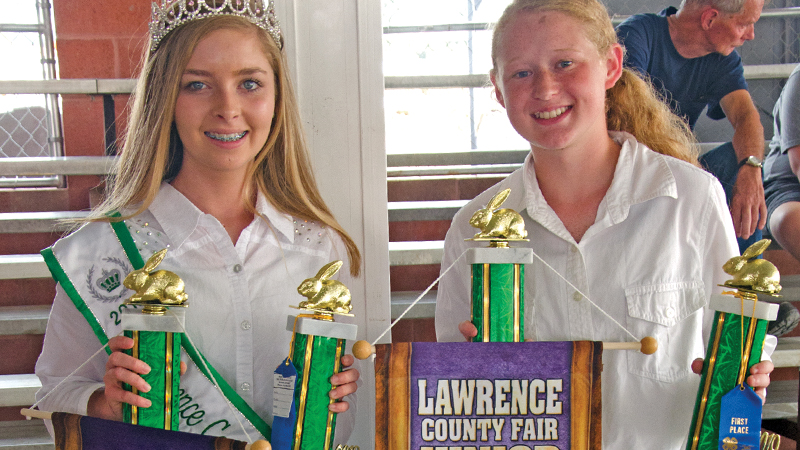 Brea Belville, left, was senior showman in the rabbit competition at the Lawrence County Fair on Wednesday. Jordan Ellison was junior showman. (The Tribune|Heath Harrison)

Dozens of 4-Hers of all age levels in multiple classes waited for the judges in the heat in what is the one of the largest completions at the fair.

The showmanship award is based on the 4-H member’s presentation and their ability to talk about the animal.

Named senior showman in the event was Brea Belville, a sophomore at Symmes Valley High School and a member of Starlite 4-H club.

She said she has been raising rabbits for seven years.

“This is my third time winning this,” Belville, who is also this year’s fair princess, said.

“It’s amazing,” she said of her win, which came in her fifth year of fair competition.

She said she got the rabbit for this year’s event around Memorial Day.

Competing for the first time this year was Evan Shook, 10, a student at Fairland West Elementary and member of Greasy Ridge Gang 4-H Club.

He said he had two rabbits and was bringing one to the fair.

“It’s about five weeks old,” he said of the animal, adding that it was easy to raise.

Taking first in the senior doe competition was Mackenzie Daniels, of Scottown Farmers and Farmerettes 4-H Club, who was also the reserve champion.

“This is my first year,” she said, adding she wasn’t expecting the win.

Montana Runnels was the winner in the senior buck competition and Gradee Holland won for junior doe.

The market rabbit show took place on Monday and Kameron Sarver was named grand champion and Bryce Gorby was reserve champion in that competition.