Cattle winners have multiple victories: 4-Hers have earned several trophies in week’s events 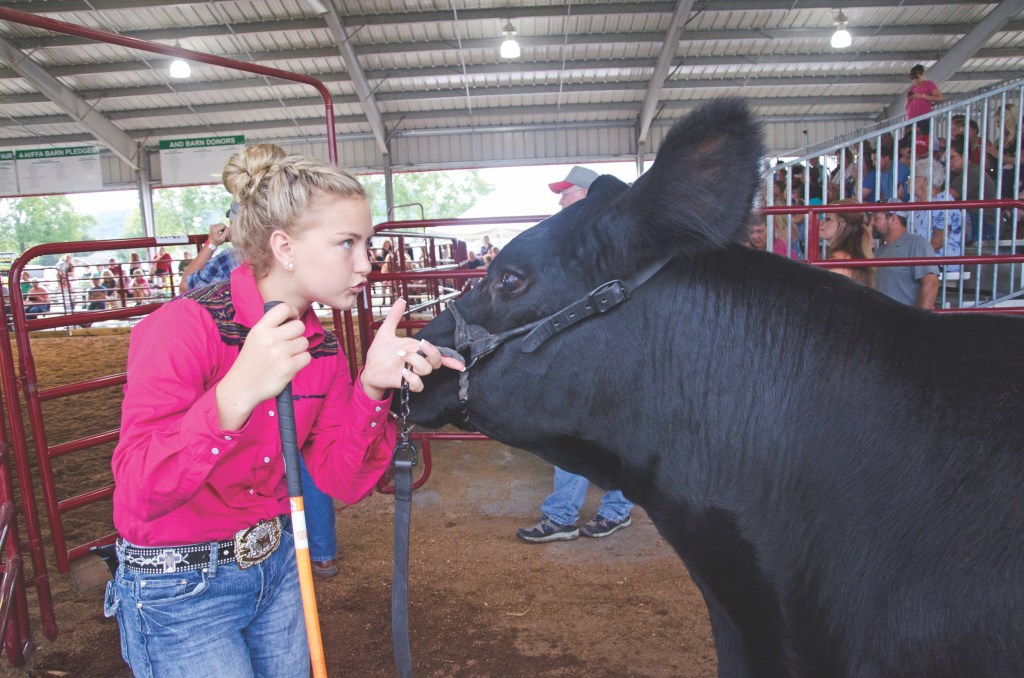 Enola Cade, of Country Clan 4-H Club, gives her cow a talk to ease its stubbornness before entering the ring during the Junior Beef Showmanship competition at the Lawrence County Fair on Thursday. Cade came in second in that competition, was reserve champion in Beef Breeding and won the Beef Breeding Sweepstakes award during the show. (The Tribune|Heath Harrison)

It was a winning week for Morris, as he was also named reserve champion in the Market Steer competition on Wednesday.

This is Morris’s last year in 4-H, having aged out of eligibility. He will be attending Marshall University in the fall for civil engineering.

He reflected on his time involved with 4-H and the fair.

“It’s had it’s ups and down,” he said. “But it’s taught me respect and dedication.”

He said he will continue to raise animals, as his family has a farm, and hopes to stay engaged with 4-H.

“I hope to get involved and help any way I can,” Morris said.

Ball, also of Symmes Valley, said she has been involved with 4-H for six years. She has won reserve champion twice and has been junior division showman.

“I’m very excited,” she said of Thursday’s win. She also took the title of senior showman.

She was also first runner-up for fair queen this year and was fair princess in 2017.

Her relatives with her described farming as a “family affair,” with everyone involved in raising many cattle.

“It feels very good,” Ferguson, a Symmes Valley Elementary student and member of Starlite 4-H, said her wins. “This is just my second year and I’ve done really well.”

In Beef Breeding, the grand champion was Morgan Klaiber, Gingham and Denim 4-H and Symmes Valley FFA. She graduated from the high school this year.

Like the others, she was having a momentous few days, having been named as this year’s fair queen on Sunday.

“It’s been going really great,” she said. “It’s been an exciting fair week.”

Klaiber, who has one more year at the fair, said she has been raising cattle her entire life and the whole family has done so as well.

Cade, who was first runner-up for fair princess this year, also won the Beef Breeding Sweepstakes contest on Thursday.

The winner is based on the 4-Hers performance in the Skillathon and showmanship events.

“It’s just what you know about your animal,” she explained of the title. She also came in second in the junior showman competition.