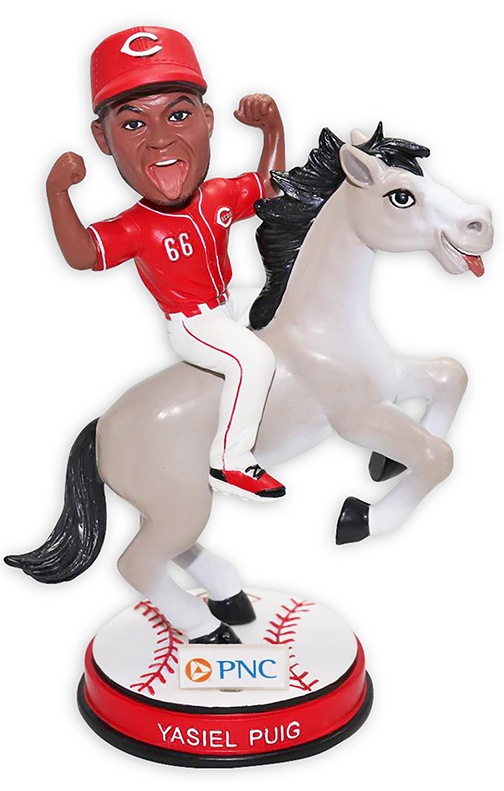 The bobblehead of Cincinnati Reds’ outfielder Yasiel Puig will be given away prior to Thursday night’s game against the St. Louis Cardinals. (Courtesy of The Cincinnati Reds.com)

Thursday, July 18 – Reds vs. St. Louis Cardinals, 7:10 p.m. (Gates open at 5:40 p.m.)
• Yasiel Puig “Wild Horse” Bobblehead: Bobblehead of the Reds outfielder with his tongue out and showing off his massive arms while riding a horse to the first 20,000 fans.
• Reds All-Stars Ceremony: Luis Castillo and Sonny Gray will be presented with commemorative plaques during pregame ceremonies to recognize their participation at the 2019 MLB All-Star Game.
• Xavier Night: Over 300 students, faculty, staff and alumni from Xavier University will be in attendance for the annual Xavier Night at the ballpark and pregame parade. Melanie Moore, XU’s new head women’s basketball coach, will deliver the official game ball.
• Apollo 11: Pregame video and in-game activities will commemorate the 50th anniversary of the Apollo 11 moon landing. A full-sized statue of Neil Armstrong’s Apollo 11 spacesuit is featured on Crosley Terrace (near the Reds ticket windows) thanks to The National Air and Space Museum’s “Apollo at the Park” program.
Friday, July 19 – Reds vs. St. Louis Cardinals, 7:10 p.m. (Gates open at 5:40 p.m.)
• Fireworks Friday: Rozzi’s fireworks with a Margaritaville® theme will begin approximately 10 minutes after the game ends.
• Harvey Haddix Award: Dylan Warner of Triad High School will be honored as the recipient of the 2019 Harvey Haddix Memorial Sportsmanship Award. Haddix was the first Reds pitcher to win a Gold Glove in 1958. Since his death in 1994, the Urbana Daily Citizen newspaper and the Haddix family have annually presented the award to a worthy high school baseball player from Champaign County, Ohio. Reds broadcaster Chris Welsh will present the award and Dylan will throw out a ceremonial first pitch.
Saturday, July 20 – Reds vs. St. Louis Cardinals, 7:10 p.m. (Gates open at 5:40 p.m.)
• Eugenio Suárez Funko Pop: As part of Super Saturdays, exclusive Eugenio Suárez Funko Pop! collectible figure to the first 20,000 fans. Limited-edition gold versions will be randomly distributed to 500 lucky fans.
• First Pitch: Michael Fisher, president and CEO of Cincinnati Children’s Hospital Medical Center, will throw out a ceremonial first pitch. Over 30,000 Cincinnati Children’s employees and guests will be at the ballpark on Friday, Saturday and Sunday for the inaugural Cincinnati Children’s Employee Appreciation Weekend.
Sunday, July 21, 2019 – Reds vs. St. Louis Cardinals, 1:10 p.m. (Gates open at 11:40 a.m.)
• Luis Castillo Fathead® Wall Decal: As part of family day at the ballpark, Luis Castillo wall decal to kids 14 and younger.
• 1961 Throwback Uniforms: All Reds players and on-field staff will wear throwback uniforms from 1961.
The club was sporting a new look in 1961 with a navy blue-infused “C-Reds” mark on the front of the jersey and a blue border around the “C” on the cap. The 1961 jerseys featured a black band to the left side to honor longtime owner Powel Crosley, Jr. who passed away shortly before the regular season. Details on all the throwback uniforms at reds.com/150. Throwback uniforms are available now at the Reds Team Shop.
• Reds Fantasy Camp Reunion: Approximately 80 attendees from the 2019 Reds Fantasy Camp will be introduced during pregame ceremonies.
• Brunch with Browning in The Handlebar: Fans can dine and watch the game in The Handlebar for just a $65 upgrade, which includes a buffet meal. Plus, meet “Mr. Perfect” Tom Browning from 11:30 a.m. to 1 p.m.
• Run the Bases: Fans of all ages can line up after the game to run the bases, with a priority line for Reds Heads Kids Club members.
Ticket Offers for this Homestand
• Senior Day – July 18: Fans 50 and older may purchase select non-premium tickets at half-price in advance of game day only.
Each ticket includes free same-day admission to the Reds Hall of Fame and Museum. Excludes Fioptics District, Upper View Level, Value View and Kroger Bleachers. Some restrictions apply. Available only at reds.com/Seniors.
• Thirsty Thursday – July 18: For all Thursday Reds home games, fans can purchase a $30 package that includes a Field Box ticket and a $10 concession credit valid for food and beverages. Available only at reds.com/Thursday.
• Margaritaville® Ticket Package – July 19: Fans can purchase a special ticket package that includes an exclusive Lizard bobblehead. Must purchase your game ticket through this offer to receive the bobblehead. Available while supplies last only at reds.com/Margaritaville.
• The Corral Ticket Package – July 19: For Friday Reds home games, fans can purchase a package that includes a ticket in “The Corral” (sections 138 and 139) and an exclusive Yasiel Puig T-shirt. Available only at reds.com/Corral.
• Family Sunday – July 21: For every Sunday home game, families can get up to three half-price tickets with purchase of a full-price ticket: reds.com/Family (Available in advance of game day, some restrictions apply)
Reds Hall of Fame & Museum presented by Dinsmore
• Gus Bell Bobblehead: Fans can receive a Gus Bell bobblehead with regular-price admission to the Reds Hall of Fame & Museum (or a Great American Ball Park tour) on Saturdays and Sundays throughout July, while supplies last. A four-time All-Star, Bell was a member of the 1961 National League Champion Reds. Bell’s baseball legacy was carried on by his son Buddy and grandsons David and Mike. They are one of only four three-generation families to play in Major League Baseball and the only three-generation family to play for the Cincinnati Reds. Bell was inducted into the Reds Hall of Fame in 1964, and we honor the 55th anniversary of his induction with this exclusive bobblehead.