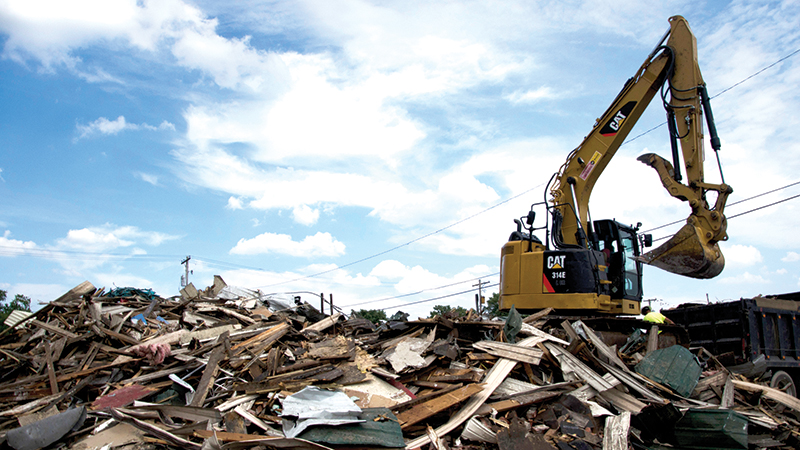 A crew from Pinkerman’s Excavating and Construction sifts through the rubble after the Shenanigans building was torn down on Third Street in Ironton on Monday.

It was a long-awaited day for the city of Ironton on Monday as demolition crews began tearing down the Shenanigans bar on Third Street.

A gathering of local officials took place before the event in the morning, which marked the 200th demolition for the county’s land bank.

Steven Dale Burcham, president of the land bank, said it was the second major commercial structure to be demolished, with the job carried out by Pinkerman’s Excavating and Construction from Proctorville.

Burcham said the building would be down by the end of the day and then crews would remove the rubble.

“By Thursday, we should have a clean lot,” he said, adding it would then undergo a greening and would be put on sale. “This is a great day for the city and the county.”

One of those in attendance was Jim Rokakis, of Cuyahoga County, who serves as vice president of the Western Reserve Land Conservancy.

Described by those in attendance as the “father of the land bank” in Ohio, Rokakis has raised $4 million to demolish 35,000 structures in Lawrence County.

“This land bank is great,” he said of Lawrence County. “They really get the concept.”

Rokakis said he is pushing for passage of House Bill 252, which would allocate money for demolition of more commercial structures in the state.

Also in attendance was South Point Mayor Jeff Gaskin, whose village benefitted from the land bank when it tore down abandoned apartment buildings on North Kenova Street.

“That was a 10-year effort,” Gaskin said of the demolition. “We were especially thrilled.”

The land bank began demolition in 2017 and targets abandoned, blighted and tax delinquent properties in the county.