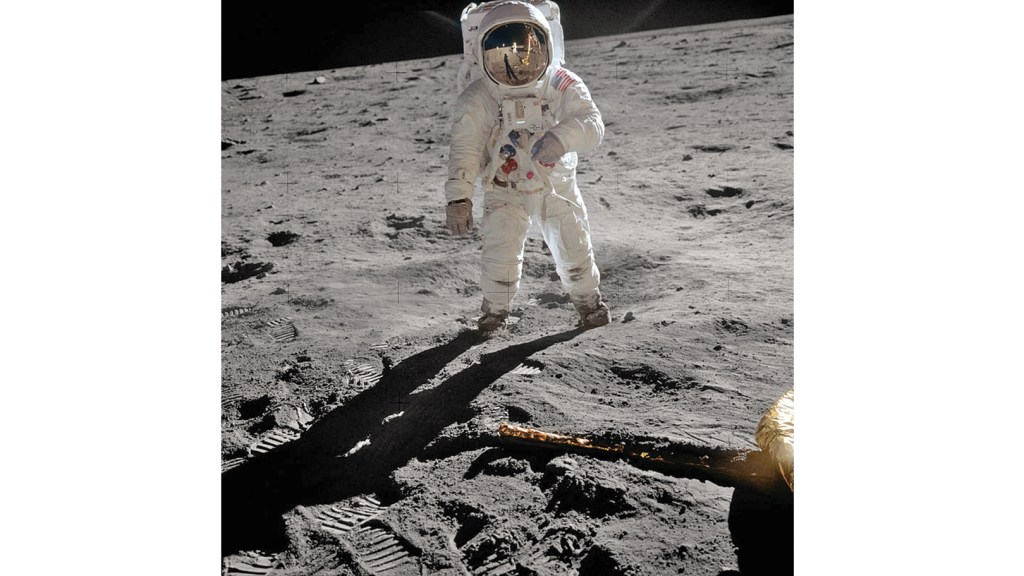 Buzz Aldrin walks on the Moon during the Apollo 11 landing. Neil Armstrong, holding the camera, is shown in his visor’s reflection. (NASA photo)

Astronauts landed on the moon 50 years ago

The project to send a man to the moon was the largest and most expensive federally-funded peace time project in the history of the world, it cost $42 billion 2018 dollars.

It was initially promoted by President John Kennedy in a speech to Congress on May 25, 1961. According to Vice President Lyndon Johnson, he asked President Kennedy to promote the sending of a man to the moon. The president did that in grand style.

It was a leap into the unknown and an impossible task.

Previously, we had only sent two men into space, Alan Shepard and Gus Grissom, for not more than a few minutes of space flight.

The moon landing would turn out to be the most significant event in the 20th century. Memories will fade of wars, protests and scientific advances, but the first time man left the earth and landed on another celestial body will be remembered.
They left the Earth on a Saturn V rocket, the most powerful rocket ever built.

It had a thrust of almost 8 million pounds, which is 41.8 times more thrust than the Russian Soyuz rocket for which we pay $40 million per trip to send one of our astronauts to International Space Station, (ISS) today. The Saturn V at 363 feet is over half as tall as the Washington monument.

Wernher Von Braun headed up the design team that built the Saturn V. During WWII, he designed the German V2 rocket. After the war ended, we had the foresight to bring Von Braun, along with about 700 German scientists, engineers and technicians, to the USA to primarily assist the military to design and build missiles, but this was kept quiet until years later.

The Apollo program employed over 400,000 people on the design and manufacture of the Saturn V rocket. Many people worked seven days a week and all hours of the day to pull this off.

The mechanics of doing this are almost beyond belief. To keep this massive 6.5-million-pound rocket pointed up for those first moments of flight is amazing.

Another outstanding feat was Neil Armstrong coolly piloting the moon lander with a nearly empty fuel tank to a perfect landing. That is not all, to think, just 8 years earlier, we knew very little about calculating orbit mechanics, but they blasted off from the moon at just the correct time to mate up with the orbiting mother ship for the trip back to the earth. That was an incredible feat.

Another interesting aspect was the origin of the Apollo space suits. They were made by the Playtex company, who were best known for their Cross Your Heart bras.

Their industrial division still makes the NASA space suits. Neil Armstrong’s suit was on display in the Smithsonian until 2006, when it was removed for rehab. The Smithsonian spokesman stated that the suit was designed to resist the vacuum of space and tears from rocks, but not for display for 50 years. The rehab is complete and it is on display again.

One event that received very little publicity was Buzz Aldrin taking communion while on the moon and reading the Gospel of John. He was an elder in the Presbyterian church.

Let us hope that the project to go back to the moon by 2024 will be as successful as the Apollo.

Don Lee writes weekly about aviation for The Tribune