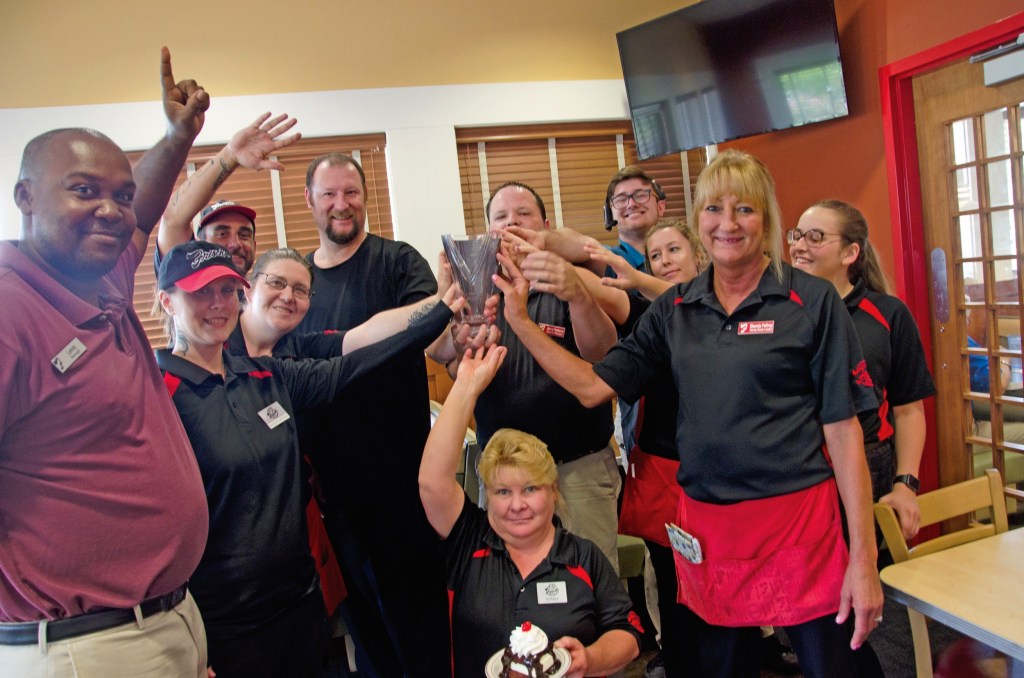 General Manager Jerry Florence and his team at Frisch’s Big Boy in Ironton gather around the trophy they received after being named as Franchise Store of the Year by their parent company. (The Tribune|Heath Harrison)

The Ironton Frisch’s Big Boy was recently named as the Franchise Store of the Year by its parent company.

“It was made by guest surveys,” he said.

Also figuring in were Steritech inspections.

“They’re an outside company and they come here four times a year,” he said. “We received the highest score in the company for food safety.”

The Ironton location opened in 2014 and is set to celebrate its fifth anniversary in the week of Aug. 11.

He said to watch the company’s social media for the weekly and daily specials during the anniversary.

He said there has also been talk of opening a second Big Boy location in the Tri-State. Currently, the nearest ones are in Maysville, Kentucky and Chillicothe, Ohio.

As this is being considered, Florence said there will be a Big Boy on Wheels, a food truck being set up by Dave Lucas, which will visit prospective sites in Proctorville, Huntington, Portsmouth and Ashland.

“It has grills and can make up to 80 burgers,” Florence said. It has handwash stations, a fryer and a prep table — everything you need for restaurant.”

He said the truck will be on the road Monday, Wednesday and Friday from August through October and that the feedback they receive could help determine where they may open another location.

Florence has been at this location since its opening and has been with the company for 12 years, where he has opened stores in various cities.

He said it has been a great experience working with local owners Jerry Rowe and Jimer Howard.

He currently has a staff of about 50 employees and four managers and said business has been strong.

“We took a little dip when the Armory opened,” he said of the new restaurant next door. “But we’ve came back.”

He said they have also increased sales to where they were at the first of the year, as well as brought in incentives for employees.

He said the Ironton location was the first franchise store in the company to do deliveries and outside catering.

“I think another factor is the high standard we have for employees,” he said of their success. “If they stay past a month, then they’re here to stay.”

Florence, who is originally from Cincinnati, said the company is what keeps him in Ironton.