What a crock: Ironton-made stoneware sells for record-breaking $177,000 at auction 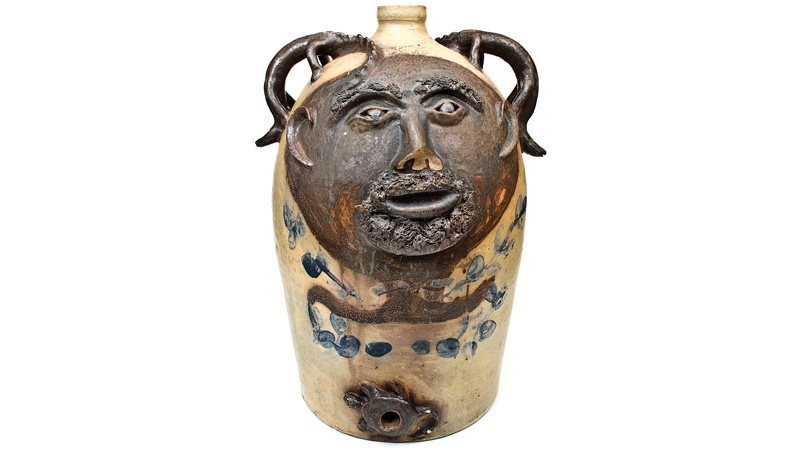 A crock made in Ironton over 100 years ago recently broke sales records at auction on Saturday.

The 20-gallon, salt-glazed stoneware cooler is just over two-foot tall and features a bearded black man, handles that look like lizards and a turtle where a spigot goes.

It went for $177,000, a record high price for both an American-made face cooler and for a piece of stoneware produced in Ohio. It was sold to Pennsylvania dealers Frank Swala and Kelly Kinzle.

The seller, Crocker Farms of Sparks, Maryland, said William Wilbur, of Ironton, handcrafted it sometime around 1870. Their auction material called it “exceedingly rare and important.”

Brandt Zipp, a co-owner of Crocker Farms, said there are certain types of American stoneware that are particularly coveted by collectors, dealers and institutions.

“One of the key categories that has a lot of interest are these things that are typically referred to as ‘face vessels’ or they are more commonly called ‘face jugs,’” he said. “For some reason, they just captivate bidders and anyone interested in American stoneware. Part of it is the folk-art quality. And having a face on there is always interesting to people than certain other designs.”

“It really has a presence to it,” he said.

He also said the piece is unusual in that it was probably used as a water cooler in a public space like a hotel. He added, that to his knowledge, there are only two examples of water coolers with faces on them.

“So, the big size with the big face makes it one of the best face vessels known,” Zipp said.

The Wilbur piece first gained fame when it was featured on the PBS show, Antiques Roadshow, which was filmed in Louisville, Kentucky in 1998.

“The fact that some might say, ‘Well, look, it’s got a great big chip.’ I don’t think it means any bit of difference whatsoever,” said Stephen L. Fletcher, of Skinner, Inc.  “And there are some hairline cracks, but, overall, it’s in fantastic condition. It made my heart beat when I saw this. In all my years of working in the auction business I never saw a piece to rival it.”

Zipp said it was a key moment for stoneware collectors. He added that it would occasionally pop up during a Google search and he wondered what ever happened to it.

“It was off the radar since 1998,” he said. The answer was that it was in a private collection, rather than being in a museum where people could see it.

A couple months ago, Crocker Farms got a message from the owner who wanted to sell it.

“It was so fun to see it in person,” Zipp said.

Brandt said that when he and his brother picked up the face cooler for the auction, they found the name “Willi[a]m Wilbur,” to the left of the face and they were able to tie it to Ironton.

During their research, they found that Wilbur started making stoneware in his family’s pottery business near Zanesville.

He served in the Civil War and, after the war, moved to Ironton around 1870 and began his own pottery business.

He later left Ironton for California in the late 1870s, where they think he continued to make pottery for a while longer.

Zipp said that not much is known of Wilbur’s life in California. He moved to Sacramento, but then the paper trail goes cold for a long stretch.

“The problem is the 1890 census is lost and we couldn’t find him in the 1900 census,” Zipp said. “So, I don’t know what he ended up doing out there. I do know he was a potter initially. My guess is he didn’t necessarily do that for very long, but I don’t know. By 1910, he was retired and living in Alameda County. He died in 1917. So, I don’t have a great story for him out there.”

To see the original Antiques Roadshow piece go to http://www.pbs.org/wgbh/roadshow/season/3/louisville-ky/appraisals/folk-art-jug-ca-1860–199803A53/