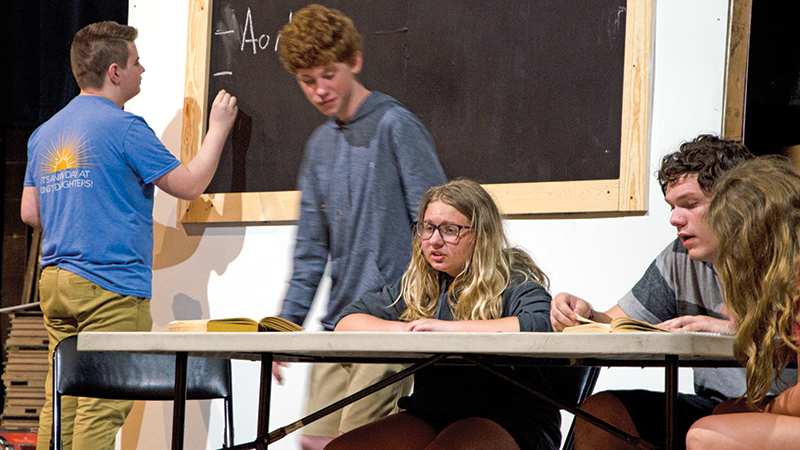 Students enrolled in the summer arts camp at the Paramount Arts Center will perform a free showing of “Freaky Friday: The Musical” at 6 p.m. on Friday. (The Tribune|Heath Harrison)

ASHLAND — Students enrolled in the summer arts camps at the Paramount Arts Center will show what they have learned to the public on Friday.

Children and teens enrolled in the two-week production camp part of the summer workshops will perform the musical “Freaky Friday: The Musical” at the theater, located on Winchester Avenue, at 6 p.m.

The musical is based on the 2003 comedy starring Lindsay Lohan and Jamie Lee Curtis, which adapted a 1972 novel by Mary Rodgers. It tells the story of a mother and daughter who switch bodies due to a magical fortune cookie.

The production camp gives children the opportunity to see all that is involved in a production at the theater, with the course starting from auditions and taking them through all aspects, such as costumes and sets, and ending with the live show.

The camp is a popular annual event and regularly draws several dozen students. They were hard at work on Tuesday, going through individual scenes in rehearsal.

The theater said this year saw a record attendance.

“We’ve seen our summer camps grow tremendously this year,” Melanie Cornelison-Jannotta, artistic director for the Paramount, said. “This camp is a great way to introduce kids to theater and what all goes in to making a production happen. Seeing their hard work pay off at the end with a live performance makes the experience even better.”

The Kentucky Arts Council, the state arts agency, supports the Paramount Arts Center with state tax dollars and federal funding from the National Endowment for the Arts.  Support is also provided by the Paramount Woman’s Association and private donations.