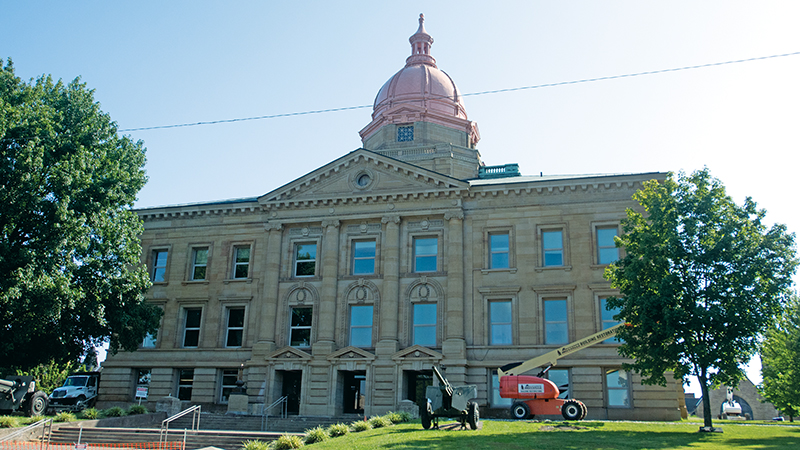 The renovations are continuing and the Fourth Street entrance is expected to reopen in November. (The Tribune|Mark Shaffer)

The dome is back to its original color and the side of the Lawrence County Courthouse has hit the stage where it looks nearly like it originally did decades ago.

But work is continuing on the building. Last July, the restoration and renovation work began on putting in new elevators, upgrading the heating and cooling systems, installing energy-efficient lighting, a new roof, sealing off potential leaks with new mortar, making the annex better match the original courthouse, fixing crumbling architectural details and returning the dome to it’s original copper color.

“The soda blasting is completed on the dome,” said Chief Deputy Auditor Chris Kline, adding that crews are still working on sealing it and making sure the dome is properly fastened. “But the pretty part is finished.”

As for the Fourth Street entrance, it will still be closed for a few more months although most of the renovation work is done on it.

“We went through Wednesday and there is a punch list of a couple things they missed here and there,” Kline said. “But for the most part it is finished and they are wrapping that up.”

Next up is putting in new steps and a ramp to the entrance.

“That should be done around Nov. 1,” Kline said. “They are going to replace all that concrete and that has to be dug up.”

He added that crews will be installing a handicap-accessible ramp that will go from the sidewalk on Center Street, across the yard and to the entrance. They will also make a couple of the parking spots only for those with handicapped stickers or signs.

“So, we are looking at a few months,” Kline said.

Kline said the lighting is installed and the public elevator is finished.

A second elevator used to transport prisoners to the courtroom is still being worked on.

Kline said crews are a little behind schedule because of the weather and because a boom truck used to reach the dome broke down and they had to wait for repairs to be done on it.

“There are only a couple of those in the United States,” Kline said. “So, it put them behind schedule, which was supposed to be Oct. 1. Now, it’s looking like Nov. 1 is the target date.”