Fritz goes from Hammer to top of Arena League 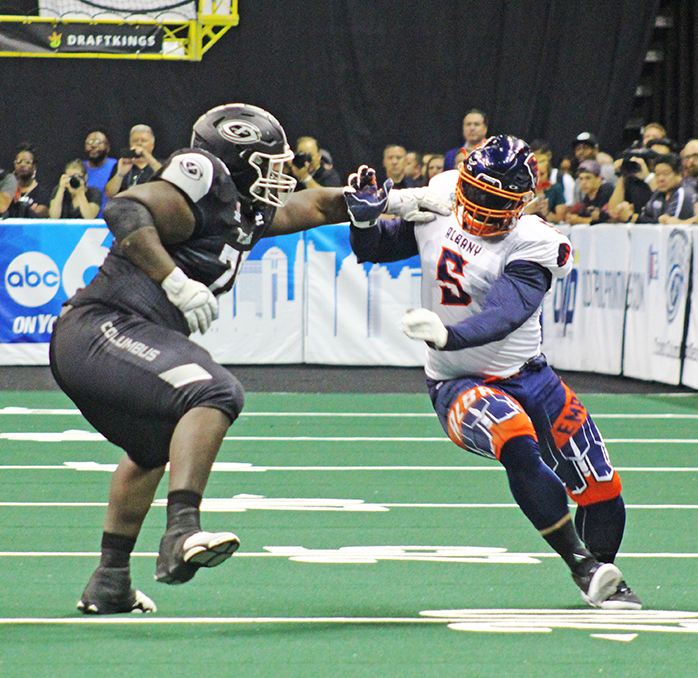 Albany Empire defensive lineman Rodney Fritz (5) takes on a Columbus Destroyers’ offensive lineman as he puts pressure on the quarterback during a game on July 14. (Ryan Walker/The Ironton Tribune)

COLUMBUS —Rodney Fritz suited up for Huntington Hammer of the Ultimate Indoor Football League in 2011.
Eight seasons have passed and Fritz is pretty sure he is the only player from that roster still active playing indoor football.
“Let me think. Whew. I think I am,” said Fritz with a laugh.
It was an auspicious start for the 6-foot-2, 270-pound 32-year-old Missouri native’s career. Frtitz began playing at the junior college level before he transferred to Tennessee State in 2008 where he played in 17 games and recorded 40 tackles and nine sacks.
From the ground floor start, Fritz has ridden the arena football elevator to the penthouse suite. Not only is he in the major leagues of indoor football, he currently plays for the Albany Empire who are the best team in the Arena League Football.
Heading into the playoffs that start Saturday night as the Empire host the Baltimore Brigade, Fritz is second on the team in quarterback sacks.
Injuries have slowed him somewhat during the season but he has been part of a rotation that helps keep players fresh and still playing.
“It was a rough season for me. I had a hamstring injury at the beginning of the season. We kind of misdiagnosed it a little bit. We thought it was just a regular tear but the hematoma started to grow,” said Fritz.
“But with the hamstring I had to do another treatment to get that healed and by that time it was it had been eight weeks. The only game I played going back into practice my left hamstring was weak obviously.”
After TSU, Fritz went indoors as he signed on with the newly formed Huntington (W.Va.) Hammer in the Ultimate Indoor Football League in 2011.
Fritz led the Hammer in tackles for a loss and forced fumbles. He was second in quarterback sacks. He efforts proved vital as he helped the Hammer reached the postseason playoffs.
The success he enjoyed did not go unnoticed and he was signed by the Tulsa Talons of the Arena Football League.
His Arena Football success earned him a chance to play in the Canadian Football League.
Following his stint with the Winnipeg Blue Bombers and Toronto Argonauts from 2011-13, Fritz returned to the AFL and was assigned to the San Jose SaberCats when he helped the team win Arena Bowl XXVIII.
Fritz split time with the Los Angeles Kiss and Arizona Rattlers in 2016 before sitting out 2017. He then signed with Baltimore where he played in nine games and help the team reach the ArenaBowl title game.
“Guys fed off me. I was the only veteran on defense,” said Fritz.
Players sign only one-year contracts in the Arena League. Fritz play Fritz’s performance for the Brigade last season and became a target for Albany coach Rob Keefe.
“Rodney was the one that gave us the most fits on Baltimore. Not only does it weaken Baltimore, it strengthens us,” said Keefe.
Fritz would love to keep playing, but he’s not sure how much gas is in the tank considering his age and injuries.
“It was rough for me and my family. We didn’t want to do the come back like this, but that’s what happened. It was God’s plan,” said Fritz.
“Whatever His plan is I just rolled with it. Hopefully, I can come back and be special with it next year and be coaching or playing. We’ll see what happens.”