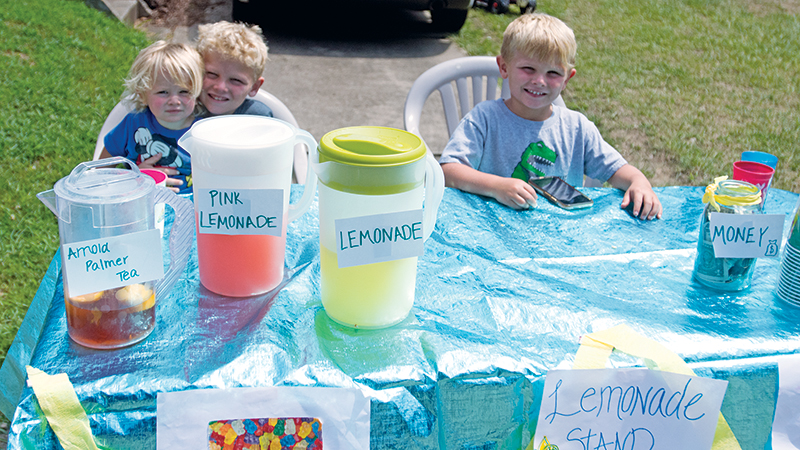 On Thursday, Avett, Alden and Abram set up a lemonade stand outside their house on Fifth Street to make some money and to spend the pleasant day outside. Not pictured is their brother, Asher. (The Tribune|Mark Shaffer)

On Thursday, drivers on Fifth Street in Ironton may have noticed four little kids trying to get their attention.

The reason was they had lemonade for sale. And quite a few people pulled over to spend a buck and get either regular lemonade, pink lemonade or an Arnold Palmer, a mixture of tea and lemonade named after the popular golfer.

When asked why they were selling three types of lemonade, seven-year-old Alden Meyers had a simple explanation for wide variety of choices.

“That’s what we had in the cabinet,” he said.

And why did they set up the lemonade stand.
“I wanted money,” he said.

Alden was manning the table with his brothers, one-year-old Avett and five-year-old Abram while another brother, Asher, was hunting things in their yard with a Nerf crossbow.

Their babysitter, Jordyn Koerper, helped them set up the stand so they could play outside on a pleasant day and make some money at the same time.

“As you can see, they are very active and this got them excited,” she said. “We’re outside and they are off the gaming systems for a while. And this was the perfect day to do it.”

Koerper also helped out sales by posting about it on her Snapchat.

“My friends and other people have stopped by,” she said. “So, they are doing pretty good.”

The boys will split the money they make and Alden already has plans for his cut.

“I’m going to buy a headset,” he explained, adding that he was planning to use it while he played Fortnite.