‘Belle in the Well’ name revealed 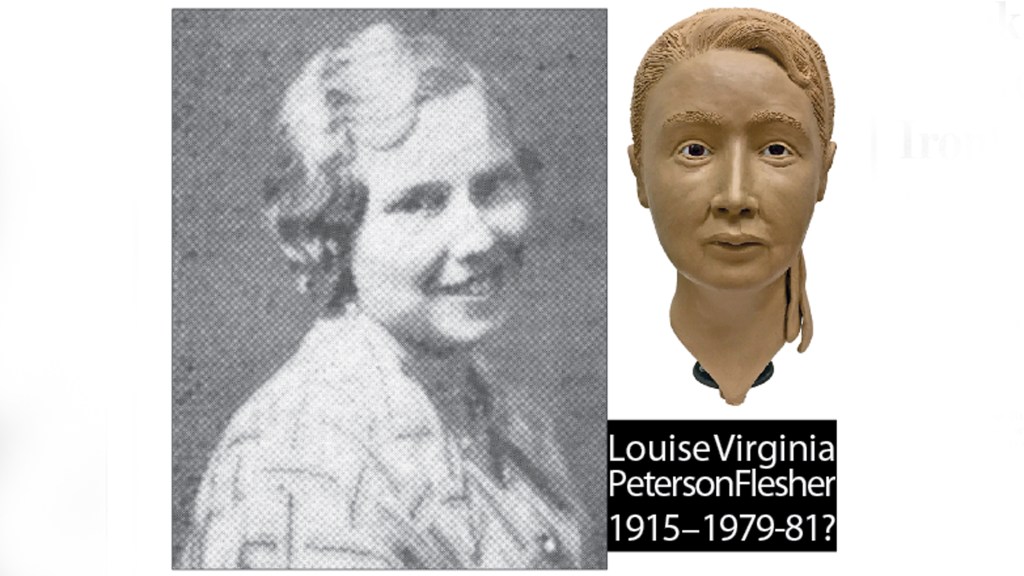 LEFT: The “Belle in the Well” was identified as Louise Virginia Peterson Fletcher. She was born in 1915 and is estimated to have been murdered between 1979 and 1981. The photo, dated from 1934, was her high school portrait and the most recent investigators could locate. (Photo provided by Lawrence County Coroner’s Office) RIGHT: This clay facial reconstruction of an unknown female murder victim from 1981 was released last year in an effort to identify her. On Monday, the Lawrence County Coroner Ben Mack will hold a press conference and release the name of the woman (Submitted photo | Ohio Attorney General’s Office) 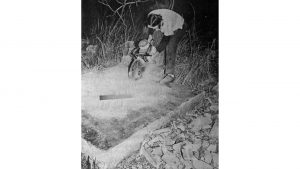 A member of the Chesapeake Volunteer Fire Department saws away cement from the top of a well on April 22, 1981, where the body of the “Belle of the Well” was found. (File photo | The Tribune | Carl Floyd)

Four decades after her murder, the woman’s whose body was found in the cistern in Lawrence County and was only known by the nickname of “Belle in the Well,” finally has her name back.

It turns out that Flesher was 65 years old and was born in 1915 in Fairvew, West Virginia, some three hours drive away from where she was found dead. She had last lived near Las Vegas before she left in 1979 and came to this area.

It took a long time and several advances in DNA and computers for investigators to find her name and piece together her background.

Flesher’s body was found in a well near Dobbstown by two teenage girls on the evening of April 21, 1981.

The body was weighed down with a piece of cloth around the neck and connected to a cinder block.

The body had been in the well from six months to two years. Because of the length of time the body was in the well, it was badly decomposed, leaving investigators without vital clues such as fingerprints, eye color or even hair color. There weren’t any papers that helped identify the body.

They later came to the conclusion that it was a middle-aged woman. The death certificate for the unknown woman listed the cause of death as manual strangulation and the approximate time of death was November 1979.

She was buried in an unmarked grave on property donated by then-County Commissioner Don Lambert, after no one came forward to claim her body.

Over the years, coroner’s investigator Bill Nenni tried every method to find out the name of the Belle in the Well.

In November 2009, the Belle in the Well was entered into the National Missing and Unidentified Persons (NamUs) System and forensic anthropologist Beth Murray contacted Nenni for more information. Plans were made to exhume the body to get DNA.

In June 2011, the body was taken out of its resting place and taken to the Boyd County Coroner’s Office. Murray did an anthropology examination and a sample of DNA was extracted from a bone. The body was X-rayed and during a dental exam, the forensic dentists noted a previously unmentioned overbite.

Over the years, there were several attempts to get clues by releasing busts of what the Belle may have looked like in life. In 2012, Franklin County Coroner’s Office released a bust based on autopsy photos. In 2013, a computer artist created a photo of what she may have looked like. In March 2018, the Ohio Bureau of Criminal Investigation created another bust. It didn’t help get any viable clues.
In 2017, one of the her molars was sent to the lab to have DNA extracted. That DNA is sent to NamUs and it took approximately 14 months to find DNA matches. Finally, in March 2019, a DNA mouth swab was taken from one of Flesher’s daughters. On July 3, the University of North Texas/NamUs DNA lab confirmed the familial connection.

The Belle in the Well has her name back, Louise Virginia Peterson Flesher.