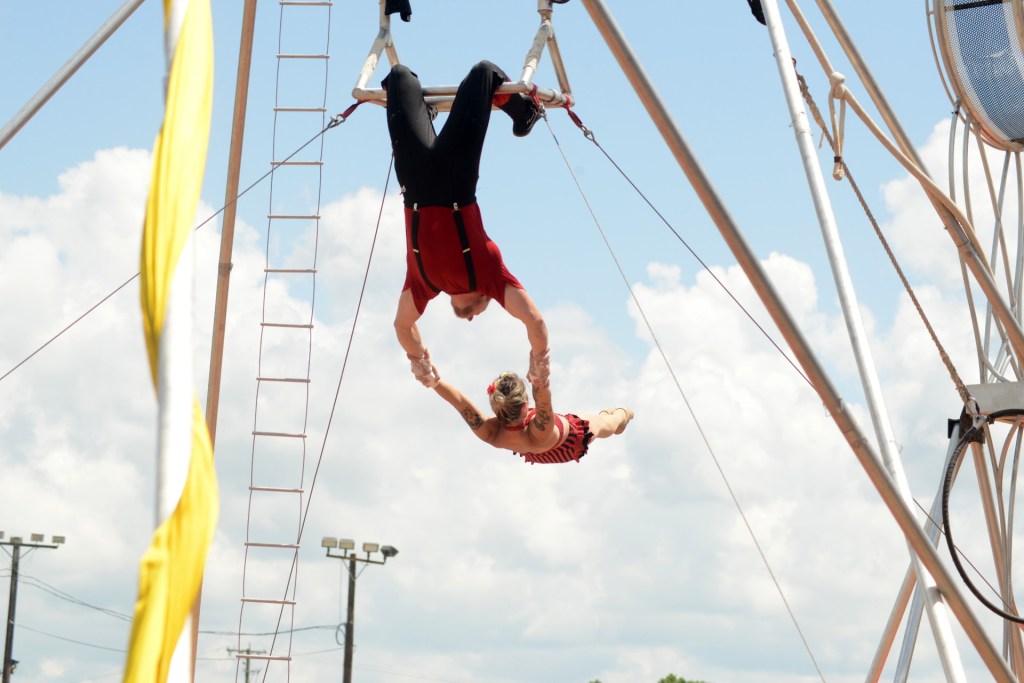 The Cincinnati Circus performed at the Lawrence County Fair in July. The group will be among the performers at the Ironton River Ride from noon-9 p.m. on Saturday, Aug. 17. (The Tribune|Kayla Niece)

Organizers of the inaugural Ironton River Ride have three days of events planned for Aug. 15-17.

The motorcycle rally, presented by posts 433 and 590 of the American Legion, Murphy’s Bar and Grill and Boomers Bar, will have a family and community-based theme and the aim is to attract visitors from across the Tri-State.

The event is starting after downtown will be without Rally on the River for the first time in years.

“We’re hoping to fill the void,” Antonio Murphy, who is assisting the Legion with organizing, said.

On Friday, FTC Wrestling will take place from 7-9 p.m., with a hot dog eating contest during the intermission.

On Saturday, Aug. 17, the Cincinnati Circus will perform from noon-9 p.m. The group most recently appeared at the Lawrence County Fair, where they put on aerial stunts and other feats.

Also on that day will be a car show from 1-3 p.m. on the Buffalo Wild Wings lot at The Hills.

Organizers are hoping to create a fair-like atmosphere in the farmers market area and the event will be free to the public with no alcohol sold at downtown events. Murphy said downtown bars will be open for bikers and will likely have related events.

Murphy said organizers planned the event for the end of summer, hoping to give families an opportunity for entertainment before students returned to school.

“We’re hoping to bring something positive to the community,” he said.

Organizers are still seeking additional sponsors and vendors for the event, as well as people to register for the hot dog contest. Murphy said those interested can visit the event’s page on Facebook.