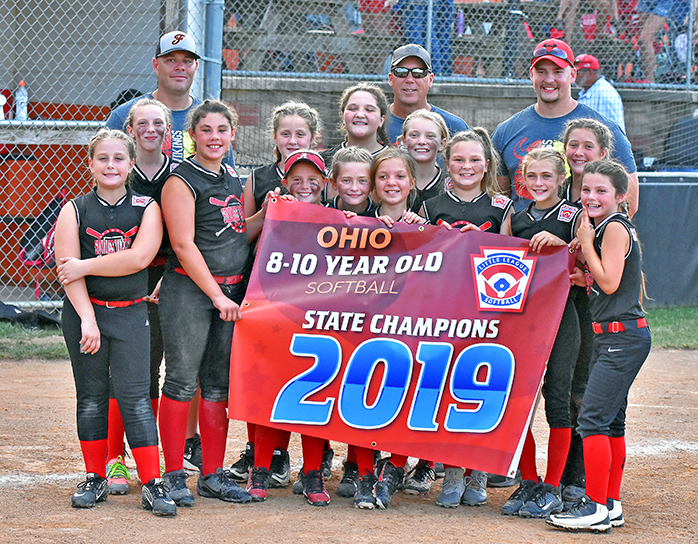 AID — At the beginning of their softball season, the Symmes Valley Little League 8-10-Year-Old Girls All-Stars set up a checklist of three items:
1, Win the Lawrence County League title; 2, Win the district tournament outright; 3, Win the state championship.
Check.
Check.
And a great big check.
The SVLL All-Stars finished off their checklist on Wednesday with a 10-3 win over Canfield at the Wheelersburg Little League field to win the state championship.
“Seven or eight of these girls went to state tournament last year and finished with a 1-2 record,” said SVLL All-Star manager Dallas Tibbs.
“Every one of them told me last year that they were coming back and win the state this year. We were doing pitching and hitting and they worked their tails off from spring all the way through.
“At the beginning of the season we laid out three goals. They wanted to win Lawrence County, win the district outright, and then win the state. They accomplished all three of them.”
The team won the Lawrence County League title as they went unbeaten against teams from Ironton, Coal Grove and South Point.
As league champions, the girls played Scioto County champion Portsmouth in a best 2-out-of-3 series and won 5-4 and 3-1.
Next up was the state tournament.
After a first-round bye, the Lady Vikings beat Warren Howland 1-0 as Marley Ferguson and Brenna Tibbs combined on a no-hitter. Tibbs had 10 strikeouts and Ferguson four in their combined pitching effort.
Tibbs threw a four-inning no-hitter with nine strikeouts as Symmes Valley blanked Canfield 10-0. Canfield came back out of the loser’s bracket to face the Lady Vikings again and Tibbs struck out 11 and allowed four hits in a 10-3 win to claim the state title.
Manager Tibbs said it was a total team effort all season.
“Every girl on the team had a situation where they came through for us with a key hit or key play,” said Tibbs.
“This was a determined bunch. All 13 kids made themselves so much better from the beginning to the end. We practiced almost every night. When I got to practice, the parents were working their kids. When I left practice, the parents were working their kids. The parents were really a big help.”
Joe Ferguson and Cody Bland served as assistant coaches for the SVLL All-Stars. Here is the team roster:
1-Lydia Saunders; 2-Evan Sells; 3-Marley Ferguson; 4-Ally Haydon; 7-Addi Ridenour; 8-Natalie Simpson; 9-Alyssa Anthony; 10-Lexi Freeman; 11-Brenna Tibbs; 12-Riley Loudenburg; 14-Autumn Justice; 53-Maci Bland; 00-Lindsey Freeman.