In your neighborhood: Registry keeps public aware of sex offenders 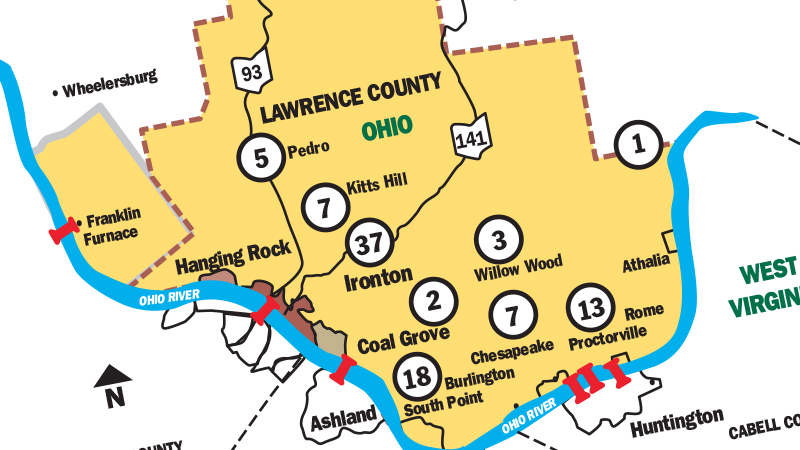 In order to keep the public apprised of sex offenders living within the area, the Lawrence County Sheriff’s Office features a sex offender registry on its website.

The page, located at https://www.lawcoso.com/sex-offenders.html, allows users to search for offenders within one mile of an address, or to look up information on specific offenders. It also features a list of all offenders registered with the county, of which 97 are currently listed.

The sheriff’s office also offers an email notification in which subscribers will receive notification and alert if an offender’s address is within Lawrence County and within one mile of the subscriber. This feature is also available in other counties through the Ohio Attorney General’s office.

State law sets a provision to register offenders and notify the public. Authorities verify the whereabouts of those registered at regular intervals, based on risk level.

According to Ohio state code, all registered sex offenders must report at regularly scheduled intervals, based on their classifications, and must report any change in address within three days to the sheriff of the county in which they reside.

All registered sex offenders must report to the sheriff immediately upon entering the county to attend school or if employed for more than 14 days or for a total of 30 days or more in a calendar year, regardless of where he or she resides.

All registered sex offenders must report to the sheriff all vehicles registered to them, all internet or email address- es to which they have access and any location where they serve as a volunteer.

“Children are particularly vulnerable to sex offenders,” the sheriff’s office states on its website, and encourages open communication between parents and children.

“In general terms, tell your children that this person has hurt someone before,” the website reads. “Explain to them that they should stay away from this individual. Avoid scary details.”

The sheriff’s office says that there is no way to accurately predict the future behavior of an offender, but “past behavior is an indication of whether an individual, or group, poses a higher risk to the public.”

“Not all offenders will commit another crime,” the website reads. “However, knowledge of a potential risk should assist you and your family in avoiding situations that allow for easy access to victims.”

The following classifications are used by Ohio’s system:

• Sexual Predator: An individual who has been convicted of, or pleaded guilty to, committing a sexually-oriented offense and is considered likely to commit additional sexually oriented offenses. Offenders with this designation are subject to registration/verification requirements for life, unless a judge modifies or terminates the designation. They are subject to neighbor/ community notification provisions and reporting requirements at 90-day intervals.

• Habitual Sex Offender: An individual who has been convicted of, or pleaded guilty to, committing a sexually oriented offense, and who has been previously convicted of or pleaded guilty to one or more sexually oriented offenses. Offenders with this designation are subject to registration/ verification requirements each year for a period of 20 years after release. A judge may rule that a habitual sex offender is subject to neighbor/ community notification.

• Sexually Oriented Offender: A person who has been convicted of, or pleaded guilty to, committing a sexually oriented offense, but who has not been designated as a sexual predator or habitual sex offender. Offenders with this designation are subject to the registration/verification requirements annually for a period of 10 years after release. They are not subject to neighbor/community notification.

The act was named in memory of Adam Walsh, a six-year-old boy who was abducted from a Hollywood, Florida department store and murdered in 1981. His father, John Walsh, has become well-known as an advocate for victims of crime and served as host of the television program America’s Most Wanted. He lobbied strongly for the passage of the legislation.

Offense tiers used by Ohio are as follows:

• Tier II: Compelling prostitution; pandering obscenity involving a minor; pandering sexual oriented material involving a minor; illegal use of a minor in nudity-oriented material or performance; when offender is at least four years older; or when the offender is less than four years older and has prior conviction for certain other offenses; gross sexual imposition victim under 13; child endangering; kidnapping with sexual motivation; kidnapping victim over 18; and abduction with sexual motivation — any sexual offense that occurs after the offender has been classified as a Tier I offender. This includes an attempt, complicity or conspiracy to commit any of these offenses. Pre-AWA habitual offenders, unless re-classified.

The Tribune was initially unable to obtain 23 of the photos from the county website, due to what officials described as a glitch in the state website, that resulted in broken links to uploaded photos. They were made aware of this issue by The Tribune.

However, 19 of these photos were provided by the sheriff’s office, with three missing.

According to Steve Irwin, the senior public information officer for the Ohio Attorney General’s Office, the glitch affected photos uploaded after 2011.

He said the office has put in a work order to have the problem fixed.

He was unsure as to how many photos were affected.

Irwin said a photo of an offender is required on registration and then during the verification process after they are on the registry.