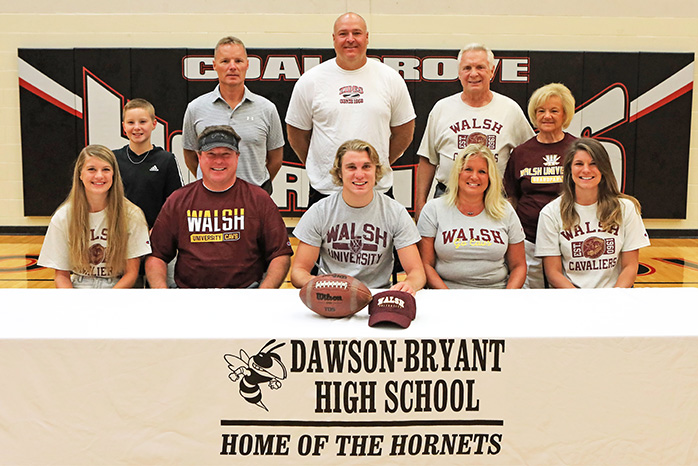 COAL GROVE — They say kickers have their own fraternity. Evan Holmes is the latest pledge to that group.
With the help of a former Coal Grove Hornets’ placekicker, Holmes signed a letter-of-intent with Walsh University on Wednesday.
Former Coal Grove kicker Darren Morgan — who played at Youngstown State — has been instrumental in Holmes’ development.
“I got a lot of help from Darren Morgan. He’s probably helped me out since fifth grade. Every time he’s come into town he’s never failed to meet me here at the high school and kick with me,” said Holmes.
“He’s there in Cleveland so I’m sure he’ll catch a couple of games. He’s really helped me progress through the years and, of course, I’ve gotten stronger as I’ve gotten older. I think of the techniques he’s taught me and helped me over the years.”
Holmes talked to five Division III schools and a couple of NAIA schools. After taking a couple of visits, Holmes made his way to Walsh.
“I fell in love with the atmosphere and the people and, of course, them playing in the Pro Football Hall of Fame Stadium was kind of a changer. I just fell in love with Walsh,” said Holmes.
Walsh head coach John Fankhauser was impressed with Holmes overall skills, not just his kicking.
“The characteristics that stand out on Evan are his athleticism and personality,” said Fankhauser. “His film showed the ability to play many positions on the football field. That was what drew us to him.
“Once we met him and got to know him and his family, his personality and goals aligned with what we are looking for in a student athlete.”
Frankhauser wants the 5-foot-11, 175-pound Holmes as a punter and placekicker, but he left the door open for additional duties.
“They also say they want to work me at slot receiver if I want to do so. We’ll see how it works,” said Holmes.
Another aspect that will help Holmes improve as a kicker will be the increased amount of time he’ll have during practice to work on his craft unless asked to play another position.
“As far as practice goes, I’ll probably be fine with just kicking, but anything I can do to help the team I’ll do whatever they want me to do,” said Holmes.
During his Coal Grove career, Holmes once kicked a 60-yard field goal in practice. His longest field goal in a game was 42 yards during his sophomore season.
“My focus will be a lot better with the college atmosphere. We’ll have a lot more work at it and a lot more guys committed to the special teams’ atmosphere where as in high school you get 10 minutes to work on it on Thursday,” said Holmes.
Holmes plans to major in middle childhood education with coaching also in his future.
The Cavaliers are an NCAA Division II program playing in the Greater Midwest Athletic Conference. Walsh — who plays at Canton Fawcett Hall of Fame Stadium — was 4-6 last season and 4-4 in the league.
Walsh opens the season Sept. 7 at Duquesne. The Cavs then play Ashland, Tiffin, at league favorite Hillsdale, at Lake Erie, Findlay, West Liberty, at Ohio Dominican, Kentucky Wesleyan and at Alderson Broaddus.