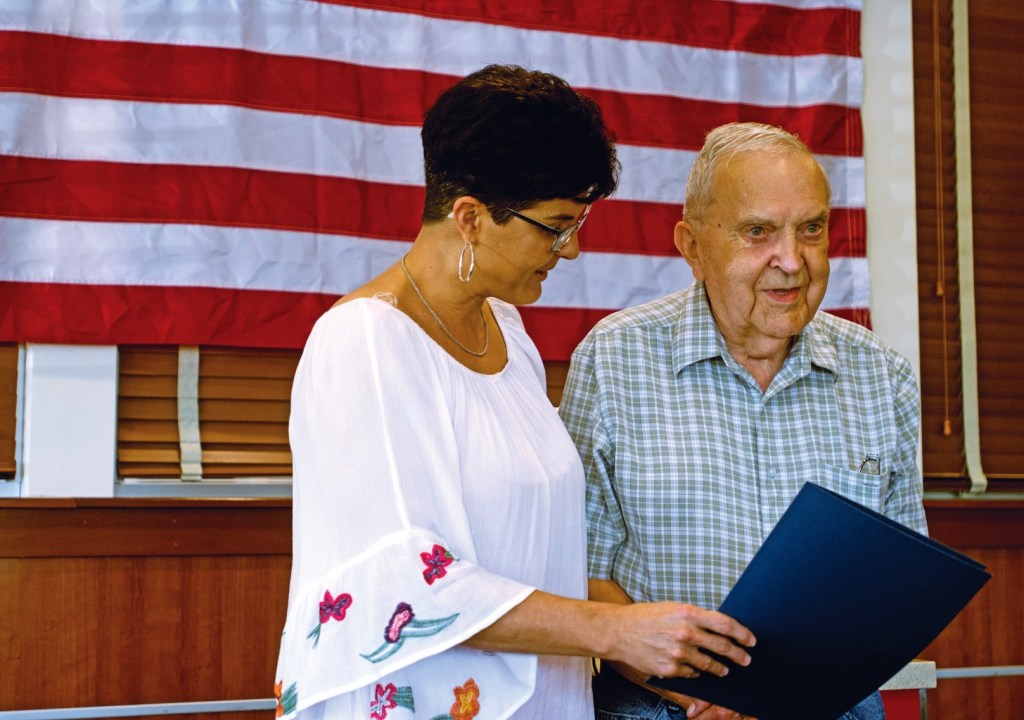 He wasn’t exactly surprised by the event.

“Well, I was tipped,” he said. “I didn’t think there would be this many people though.”

The back dining room of the restaurant was filled with family, friends and a lot of members of the Southern Ohio Amateur Radio Association (SORA), which Massie has been a part of for decades.

Massie has been a lot of things in his life, an insurance agent, and a Marine sergeant for eight years during the Korean War era. When he got out of the Marines, he came back to the area and got a job at the Allied Chemical plant and then spent 30 years at Dow Chemical.

He said he likes the hobby part of it, but prefers the helping out first responders during emergencies and at events like the annual Ironton-Lawrence County Memorial Day parade.

“We have done a lot for the county during emergencies,” Massie said.

His friends in SORA arranged the event and got him a giant cake. Massie also got proclamations from U.S. Rep. Bill Johnson, Ohio State Treasurer Robert Sprague and Ironton Mayor Katrina Keith.

Keith read off some of Massie’s accomplishments including being an incident commander for communication events, a staffer during emergency events and being the net controller for the Memorial Day parade.

“So, we want to thank you for everything you’ve done in Lawrence County and the entire area,” Keith said.

Massie thanked everyone for showing up.

“I have had a really good time being a ham radio operator,” he said. “There have been so many different events take place here and all over the country.”

He said that one of his favorite things to do was help personnel at an Antarctic base connect up with their loved ones. He explained that there are no telephone lines to the Antarctic, so the only way to communicate was getting a ham operator to connect them to a telephone so they could talk to their loved ones.

When asked if there was any secret to living to the age of 90, Massie didn’t give any advice but he said that he was born in 1929 in the midst of the Depression.