A Gorey legacy: Author and illustrator’s ashes buried at Woodland in 2000 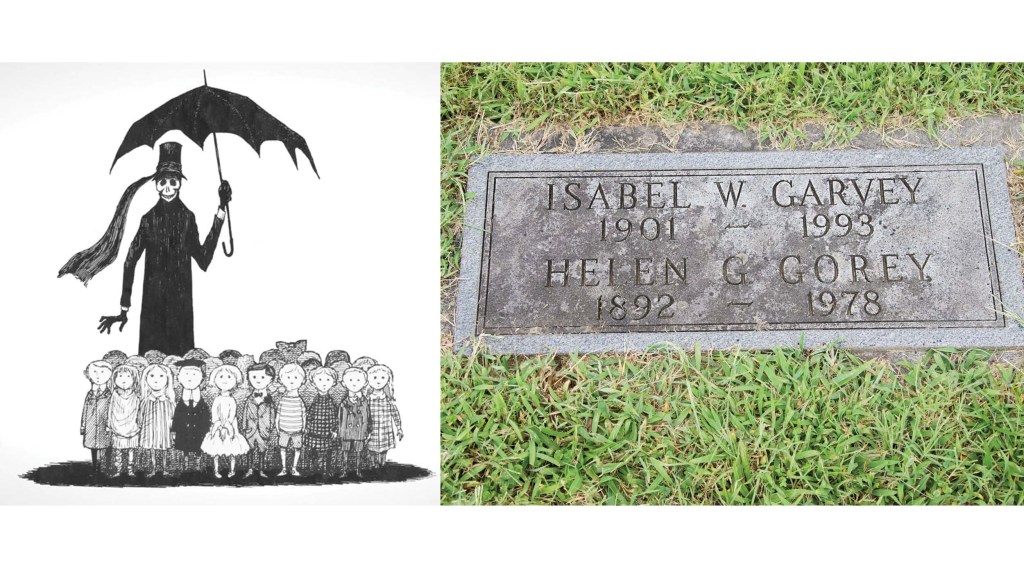 For years, fans of a macabre author and illustrator thought his ashes were scattered, but, it turns out, they should have looked closer to his ancestral home in Ironton… 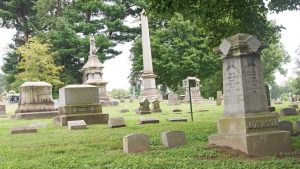 Section 7 at Woodland Cemetery, which contains the ashes of illustrator Edward Gorey, contains monuments dating to the Victorian era and resembles many of the scenes in the artist’s work. (The Tribune | Heath Harrison)

Woodland Cemetery in Ironton is home to many notable burials, and the lives of those interred there have been well-documented by local historians. Yet, for nearly 20 years, the ashes of one of the most famous individuals in the cemetery have resided unmarked and unnoticed.

When illustrator and writer Edward Gorey died on April 15, 2000 at age 75, obituaries across the globe paid tribute to his work and influence. His art, a mix of macabre and whimsy, has inspired a host of creators, including comics writer Neil Gaiman, filmmakers Tim Burton and Guillermo Del Toro and “Lemony Snicket” author Daniel Handler.

Populated with Victorian-era gentlemen, waifs and Jazz Age flappers as recurring characters, his work is instantly recognizable, with his eerie style earning him the nickname of “The Godfather of Goth.”

And though he never explicitly wrote for children, many of his books have become popular with younger readers, particularly those with a developing sense of black humor.

His best-known work along these lines is likely 1963’s “The Gashlycrumb Tinies,” an alphabet book with each letter dedicated to a child who meets an unfortunate fate. (“A is for Amy who fell down the stairs, B is for Basil assaulted by bears.”)

He often used his talents to illustrate great works of the past, such as a bestselling edition of H.G. Wells’ “War of the Worlds,” published in 1960, as well as novels by Bram Stoker, Franz Kafka and T.S. Eliot. He revisited Stoker’s classic in 1977, designing costumes for Broadway revival of “Dracula,” for which he won a Tony Award for Best Costume Design.

Maintaining a strong, but cultish, following, his work probably saw its greatest penetration into the general public conscious when he co-directed the animated opening to PBS’ “Mystery,” in which actor Vincent Price hosted each week from “Gorey Mansion.”

Yet, when Gorey passed 19 years ago, few in Lawrence County would have suspected that he had ties to this area, much less made it his resting place.

One such local native was Randy Blair, a 2002 graduate of Ironton High School. He has been living in New York City since attending and graduating from New York University and works as an actor on Broadway.

Blair was reading “Born to Be Posthumous,” author Mark Dery’s comprehensive biography of Gorey, which was published in fall 2018.
He said he was initially drawn to the book by its cover photo of the artist.

“I knew about Edward Gorey, but I was never a huge fan or anything,” he said, adding that he knew the “ghastly” look of his work and had a passing appreciation for works like “Tinies.” “But, mostly, I picked it up because he’s a big weirdo, an eccentric guy. In the picture on the front, he’s in a fur coat with all these rings on, and I was like ‘Who is this?’”

Blair read of Dery’s account of Gorey’s life, from his birth in Chicago, to his upbringing in Cape Cod and move to New York and, finally, his last years returning to Cape Cod.

“Then, at the end of the book, when it’s talking about his death, I sort of jumped out of my chair,” Blair said. “Because it said his ashes were interred in Woodland Cemetery in Ironton.”

Accounts previous to Dery’s had only mentioned the ashes being scattered, yet the author explained, in detail, how Gorey’s cremated remains were interred with his mother at Woodland.

“I was pretty sure I was the only person who’d ever read that book who knew where Ironton was or what that was all about,” Blair said.
Blair, who returns home twice a year to visit his family, decided to follow the details in Dery’s book and use his visit this week to go on “a sleuthing mission.”

Blair first visited Woodland, where, it turns out, his cousin, Lauren Cooke, works as a secretary.

“I went up Monday, she pulled up the death card and we went to the spot,” he said. “And, then, there he is.”

Cemetery records show that Gorey’s ashes were buried, two months after his death, in the plot of his mother, Helen Garvey Gorey, who lived from 1892 to 1978. The marker on the plot lists her name, along with her sister, Isabel Garvey, who died in 1993.

While Edward Gorey never lived in Ironton and his mother and aunt were living elsewhere when they passed, they all chose the cemetery because of their family’s history in the region.

“They considered it their ancestral home,” Blair said of the Goreys’ view of Lawrence County.

Blair counted seven family members of Gorey buried at Woodland, on Gorey’s mother’s side, including both the Garvey and St. John surnames. Gorey’s father, a journalist who divorced his mother when he was 11, is buried in another state.

One of those relatives was his maternal great-grandmother, Helen St. John Garvey, who lived from 1834-1907. She was a popular writer and artist of greeting cards and Gorey often said he inherited her talent. Born in Onondaga, New York, she is recorded as living in Ironton in the 1870s, around the time Woodland was founded.

Gorey dedicated his 1969 book, “The Iron Tonic” to her. Described as a surrealist country house mystery told in rhyme, its title could be a coincidence or an example of the author’s use of word play.

Adjacent to the grave she shares with her husband Benjamin, a large, cross-shaped monument marks the grave of her mother, Charlotte Sophia St. John, who lived from 1811 to 1895.

Her name will have significance to fans of Gorey, as she shares a name with the orphan Charlotte Sophia, the subject of “The Hapless Child,” one of Gorey’s most well-received works, published in 1961. 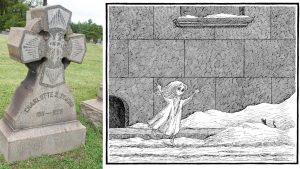 In Dery’s biography of Gorey, he said the Buckeye Monument Company received an inquiry from a funeral director in Cape Cod about erecting a monument. A price quote was given, but it was never followed up on.

Blair visited the Buckeye Monument Company this week and, while they did not have any record of the request as the sale was never completed, he said they were able to pull paperwork from 1993, which Gorey had filled out to install the monument to his mother and aunt, following the latter’s death.

Cooke said Woodland’s records indicate the interment of Gorey’s ashes was carried out, with directions to be placed with his mother.

She said the cemetery has not received any inquiries over the years about him and her cousin was the first to mention it to her.

“We asked the groundskeepers and they didn’t know,” she said.

She said Section 7, in which Gorey and his family are buried, is one of the oldest in the cemetery. With its large monuments, its plots were usually owned by wealthier families.

“Most of them had money,” she said.

Kay Rader, of the Lawrence County Museum, who also hosts the annual Historic Cemetery Walk at Woodland, said they had no knowledge until this week, either, that Gorey’s ashes were in the cemetery.

“And we didn’t have any information on either of the family names,” she said.

Portions of Gorey’s ashes are also said to have been scattered at sea or mixed with those of his cats and spread at his home in Cape Cod. The 200-year-old home, which he purchased in 1979, now serves as The Edward Gory House, a museum preserving his work and legacy.

Gorey, who had no children, left the majority of his fortune to a charitable trust, which benefits the welfare of cats and dogs, as well as other animals.

His legacy remains strong and his books continue to sell well, nearly two decades after his death. Dolls, stickers and other merchandise based on his work can be found at many a book store and the rights for his work have been optioned by Jim Henson Studios and a motion picture release has been in development for several years.

Blair said, since reading Dery’s biography of Gorey, he has become fascinated and has consumed his work, reading four comprehensive anthologies.

He said finding out Gorey’s connection to his hometown was something he wanted to share when he brought it to the attention of The Tribune this week.

“It was cool, because I was positive no one in Ironton knew about it,” he said. “It’s such an odd thing. I felt people need to know about it.”

Gorey once suggested two possible epitaphs for a gravestone: “Not really” and “Oh, the of it all!”

“Without anything in the middle,” Gorey told interviewer Richard Dyer of the latter pick. “Just leave the middle out.”

While Gorey’s grave remains without a marker, Blair said he finds the section of Woodland to be reflective of his work.

“There’s a lot to do with graveyards and monuments like that,” he said, adding that if Gorey had visited Woodland, it could have been an inspiration. “It’s very fitting for his life for that to be where he’s buried in an unmarked grave.”

— For information on Gorey’s life and work, visit www.edwardgoreyhouse.org