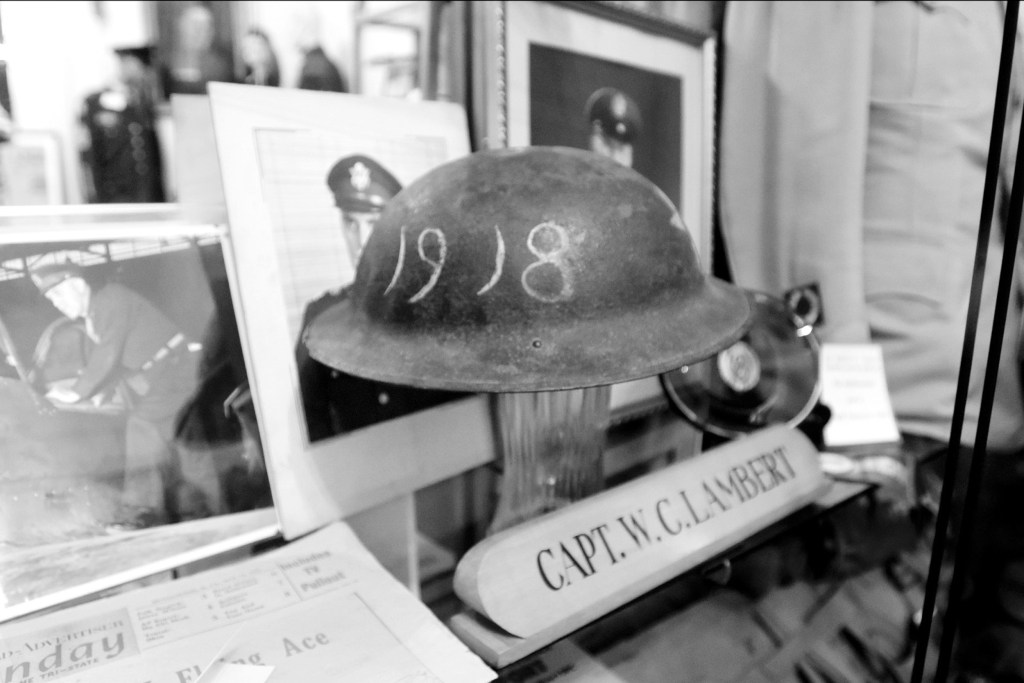 Items from the career of World War I flying ace Col. Bill Lambert are displayed in the War Room of the Lawrence County Museum. A new museum is being launched, which will display historical artifacts and records reflective of Lambert’s life and military service. The Col. William C. Lambert Military Museum and Archive will feature historical material of a military nature relating to the life of Lambert and all veterans of Lawrence County. (The Tribune | Jessica St. James)

The Aug. 18 observance of the 125th birthday of local World War I flying ace William C. Lambert is being used to announce the launch of an Ironton-based museum designed to serve as a repository of historical artifacts and records reflective of his life and military service.

Two years in development, The Col. William C. Lambert Military Museum and Archive will feature historical material of a military nature relating to the life of World War I ace Lambert and all veterans of Lawrence County and our nation.

“Our mission is to document, preserve, and explain the role and legacy of these veterans who shaped our national experience so that citizens will understand the price of freedom and be inspired by their example,” explained University of Rio Grande history Professor Samuel Wilson, Ph.D. Wilson is author of the 2016 book, “Bill Lambert: World War I Flying Ace.”

From late March to mid-August 1918, Lambert served as a fighter pilot for the Royal Air Force in what would come to be known as the “Great War,” World War I.

When he was hospitalized as a result of shell shock and burst eardrums, Lambert’s 22 kills of enemy aircraft were the highest number of any American pilot in the war.

By the Armistice, Lambert’s total would be surpassed only by Eddie Rickenbacker, a former race car driver from Columbus.

According to Wilson, the main goal of the WCLMMA is to preserve artifacts and documents of the military history of the local area.

Artifacts under consideration will specifically include, but not be limited to, the 91st Ohio Volunteer Infantry, raised at Camp Ironton in 1862; Col. W.C. Lambert, the second highest scoring American Ace in WWI; Company I, serving with distinction in the 37th Division at the Meuse Argonne Offensive; and Company K, “The Iron Men of Metz,” which was the Ohio National Guard Company formed at the Ironton Armory. While serving in WWII, they were the first troops to enter Fortress Metz.

“This year will be 125th anniversary of Lambert’s birth and we are using that to launch the museum in the press,” Wilson explained.  “The goal is to get recognition and financial support. We are a 501(c)(3) corporation, so we are recognized as a non-profit organization.  Our organizational committee has been meeting for over two years.”

“At our first meeting, Ironton Mayor Katrina Keith showed her support for the museum by being the first person to donate funds for the organization to achieve its objectives,” Wilson said.

“We are currently looking for donations and a location for the museum” he added.  “Discussions are taking place with numerous entities to have a building in downtown Ironton donated for this purpose. We also want to ask local citizens who have Lambert memorabilia to consider donating to the museum.