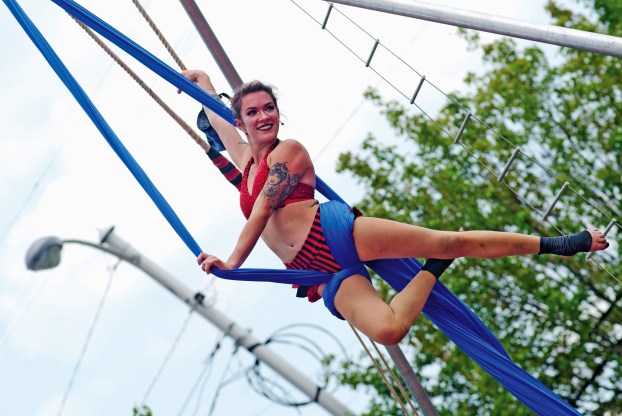 Gia, from the Cincinnati Circus Company, performs on the aerial silks during the stunt portion of the show at the Ironton River Ride on Saturday. (The Tribune/Heath Harrison)

The Ironton River Ride wrapped up on Saturday, with the Cincinnati Circus Company providing entertainment throughout the event’s third day.

Spectators were treated to hourly shows from the group, alternating between Shane and Gia, who performed aerial stunts and feats such as fire juggling, and Dave and Brandi, who showed their unusual skills during their comedy sideshow.

“It’s going great,” Pete Carter second vice for the American Legion, said of the turnout. “Everyone’s here with their kids and everyone’s enjoying their self.”

The event was put together by posts 433 and 590 of the Legion and organizers sought to provide a family-friendly environment downtown, with a fair-like atmosphere on Saturday.

The event was also designed to fill the void left by the city not hosting Rally on the River this year.

“Everything’s going great,” Frank Murphy, commander of the Legion said. “We only had 20 days to get this all together. There’s been no trouble and everyone’s having a good time.”

In addition to the circus, the area near the farmer’s market felt like a carnival midway, with vendors selling cotton candy and other fair foods.

An Ironton resident, he said it was good to bring his traveling business to his hometown, as he usually does events on the road.

There was also a car show set up at the Buffalo Wild Wings lot earlier in the day, while the previous two days featured rock and bluegrass music.

The downtown bars also hosted events throughout the four days, though the main activities at the farmers market were alcohol-free.

The Cincinnati Circus Company has up to 80 performers, who travel to events throughout the region.

“Last week, we were on the upper peninsula of Michigan, the next week, we’re in Bedford, Pennsylvania,” Dave Willacker, who was one of the two sideshow performers, said.

Altogether, the four performers worked for nine hours on Saturday.

“We had a great time,” Willacker said. “These were nice, enthusiastic people. And the American Legion was great to work with. We hope to be here again next year.”

OUS to have incubator open house: Southern Launch is in response to needs of start-up community

Ohio University Southern will have an open house for its new business incubator, called The Southern Launch, on Wednesday. Nicole... read more