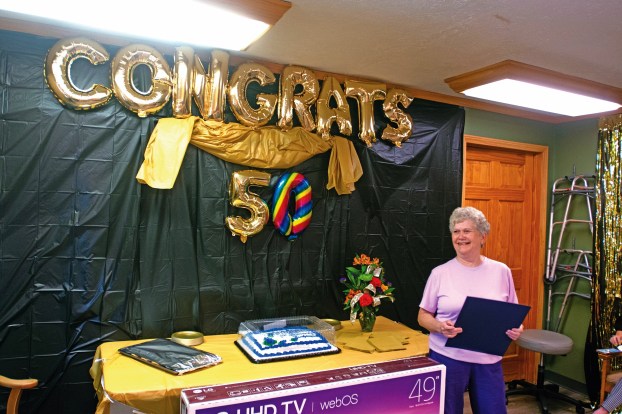 On Wednesday afternoon, Mary Lou Jenkins, a worker at Crystal Care Center in Coal Grove, was given a proclamation from the Ohio House of Representatives honoring her for working at the facility for five decades. (The Tribune | Mark Shaffer)

COAL GROVE — A Coal Grove worker was awarded for five decades of service.

Mary Lou Jenkins has been working at Crystal Care Center since 1969 and on Wednesday afternoon, there was a party to celebrate the milestone, which included a commendation from the Ohio House of Representatives, a cake, food and a 49-inch big screen TV from her employers.

Her co-workers joked that they wanted a 50-inch TV, an inch of screen for every year Jenkins has worked, but the sets don’t come in that size.

She was a little surprised by the party.

“I suspected something was up by the way she was acting,” Jenkins said of Carrie Russell, the social services designee.

She was surprised by the proclamation.

“I never expected it,” Jenkins. “I sure didn’t, but it is really nice.”

While Jenkins appreciated the TV, party and proclamation, she wasn’t content to sit still and enjoy the accolades.

“Can I get back to work?” she asked jokingly.

Jenkins, a Deering resident, began working at the facility, then known as Sunset Nursing Center in 1969. As for hitting the 50-year mark, she said “I just like working. I’ve worked here so long, it feels like home. I like everybody, everybody gets along.”

When asked if she ever thought about retiring, Jenkins said she actually retired about 15 years ago, but came back to work because she missed the job and all the people.

Russell said that Jenkins is the reason she got a job at Crystal Care Center 10 years ago.

“Fifty years, thats says it all,” she said. “She is one of the hardest workers we have. You can always depend on her.”

Jenkins started out in housekeeping and then trained to be a nurse’s aide.

“I don’t know how long I was a nurse’s aide but I got too old to lug and tug and so I went back to housekeeping, kitchen and laundry. I’ve done it all, just about,” Jenkins said.

Two Ironton stores are planning a fall festival for the first week of October. Pumpkins on Vernon will take place... read more