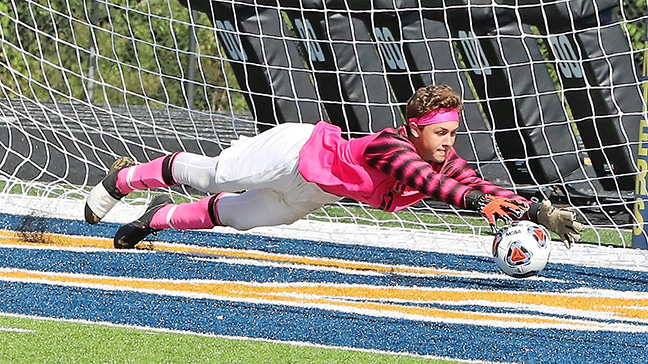 St. Joseph Flyers’ goalkeeper Jimmy Mahlmeister stretches out as he prevents a goal during Saturday’s game at South Point. The Flyers blanked the Pointers 2-0. (Photo By Tim Gearhart)

SOUTH POINT — It’s just like Meatloaf’s famous song, “Two Out of Three Ain’t Bad.”
The St. Joseph Flyers have started the soccer season with a pair of wins in three games the past week.
Last Saturday, the Flyers snapped a scoreless halftime time with a pair of goals by Zach Roach as they blanked the South Point Pointers 2-0.
J.C. Damron and Ryan Payne each had an assist on the goals while goalkeeper Jimmy Mahlmeister recorded seven saves.
On Tuesday, the Flyers couldn’t find their offense in a 6-0 Southern Ohio Conference loss to Lucasville Valley. Mahlmeister was the bright spot with 11 saves.
St. Joseph rebounded with a 7-1 win over the Chesapeake Panthers on Thursday.
Jackson Rowe had a big game offensively with three goals while Mathew Sheridan and Roach scored two goals each.
Roach also had a couple of assists while Zachary Johnson, Rowe and Sheridan had one assist each.
The Flyers play at Portsmouth West on Tuesday in an SOC game.

Pointers use big second half for first victory