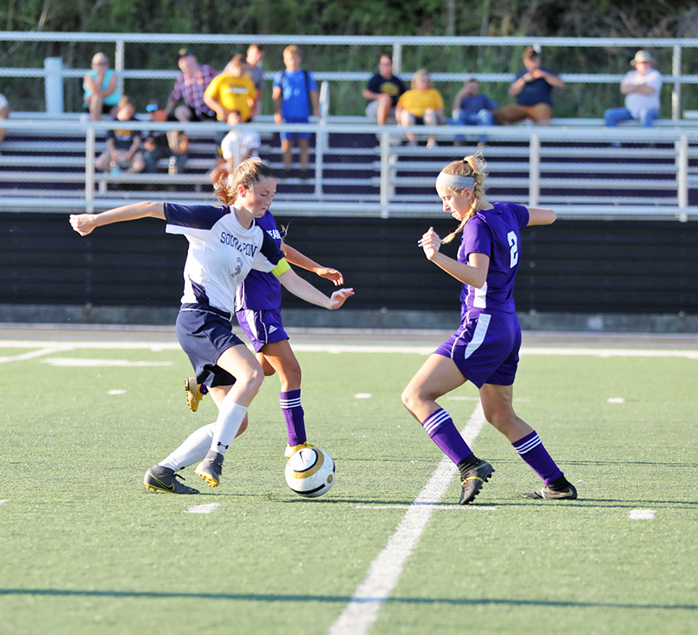 CHESAPEAKE — Fortunately for the South Point Lady Pointers, there are two halves in soccer.
After falling behind 2-0 in the first half, the Lady Pointers battled back in the second half and tied the Chesapeake Lady Panthers 2-2 in an Ohio Valley Conference game on Tuesday.
“I’m not sure why, but we are a second half team,” said Lady Pointers’ coach Erin Jenkins. “It seems every game we play better in the second half and catch a second wind. It’s something we need to fix. We want to come out and set the tone, not have to catch up in the second half.”
Chesapeake took the lead on a goal by Olivia Kerns at the 18-minute mark. The lead went to 2-0 nine minutes later and stayed that way until halftime.
Finally, at the 56-minute mark, Aysiah Sharp used an assist from Elaysia Wilburn to score and cut the deficit to 2-1.
Sarah Roach tied the game with 68:00 on the clock with an assist from Emilee Whitt.
“My girls came out very flat and with no energy in the first half. We were out two starters and the girls played like they were discouraged by that,” said Jenkins.
“I challenged them at halftime to play like they were losing and to play with more urgency. They responded very well and scored two goals and gave up zero goals in the second half.”
Emma Byrd had nine saves.
“Byrd is an inexperienced goalie who has been thrown into the fire but is getting better every game and her confidence is growing,” said Jenkins. “Katie Lester stepped up as a senior captain in the second half along with our defense in Jacyie Walters, Destiny Smith and Alli Lively.”
Chesapeake had a strong defensive effort from Kara Taylor.
South Point 0 2 = 2
Chesapeake 2 0 = 2
First Half
Ch — Olivia Kerns 18:00
Ch — Chesapeake goal 27:00
Second Half
SP — Aysiah Sharp (Elaysia Wilburn assist) 56:00
SP — Sarah Roach (Emilee Whitt assist) 68:00

Rock Hill Redwomen midfielder Makayla Scott (2) slips the ball past a Fairland defense during a 4-0 OVC win on... read more