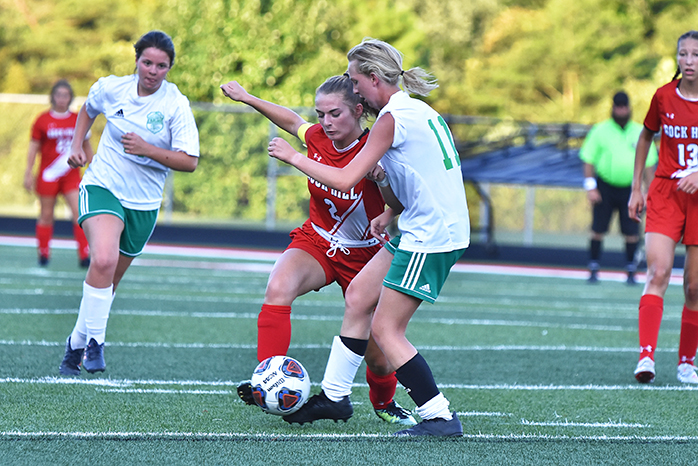 PEDRO — The early season has produced a lot of zeroes for the Rock Hill Redwomen.
Rock Hill has zero losses in four games and has had zero points scored against the defense including a 4-0 Ohio Valley Conference soccer win on Tuesday.
Freshman Bri Reynolds highlighted the win with a hat trick and she also shared an assist for the other goal.
Lucy Simpson also had a big game offensively as she scored a goal and provided an assist on each of Reynolds’ first two goals.
Reynolds scored at the six-minute mark with Simpson’s assist and the two teamed up four minutes later to make it 2-0.
Simpson then scored as Emmi Stevens and Reynolds provided the assist at the 19:00 mark.
The final game came in the second half at the 51-minute mark as Reynolds scored an unassisted goal.
Goalie Grace Stevens had one save as Fairland was limited to just two shots and only one on goal. Rock Hill had 19 shots with 11 on goal.
Rock Hill is 4-0 on the season and has outscored opponents 20-0.
Fairland 0 0 = 0
Rock Hill 3 0 = 4
First Half
RH — Bri Reynolds goal (Lucy Simpson assist) 6:00
RH — Bri Reynolds goal (Lucy Simpson assist) 10:00
RH — Lucy Simpson goal (Emmi Stevens/Bri Reynolds assist) 19:00
Second Half
RH — Bri Reynolds goal (unassisted) 51:00
Saves—Fairland: Mia Howard 7; Rock Hill: Grace Stevens 1
Corner kicks: Rock Hill 14, Fairland 0
Shots—Fairland 2 (one on goal); Rock Hill 19 (11 on goal)