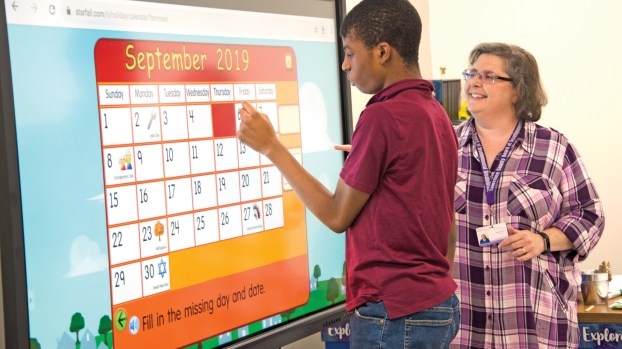 Teacher Brenda Willis leads students at the interactive board at Open Door School on Thursday. Voters will decide on a 2.5 mill levy in the fall election to fund Lawrence County Developmental Disabilities, which operates the school. (The Ironton Tribune | Heath Harrison)

Voters will be asked to decide on several ballot levies in the general election on Nov. 5.

The most talked about of these is the Lawrence County Developmental Disabilities levy.

Those supporting the levy point out that Lawrence County DD ranks near the bottom statewide for the amount of funding it receives from local tax funding and that the agency has not been on the ballot for a levy for 13 years.

They say the cost of services has increased and, as a result, they have taken steps to reduce costs by consolidating buildings, reducing positions and maximizing revenue.

LCDD recently sold property in Coal Grove to the county, which will be used for a 911 center, in order to pay for the renovation and relocation of Open Door School to its new building, which opened last month in Coal Grove.

They said this will keep the cost from coming from their general fund and that staying in their old location in Ironton would have exceeded the cost of renovations.

Tim Nunnery, director of communications and resource development for LCDD, said the agency would face a significant funding shortfall without the levy.

He points to services offered to provide transportation for those with disabilities, for purposes such as work and appointments.

“We’re responsible for 40 percent of the cost,” he said.

He said there is a waiting list for these services and that the levy funding would help pay for them.

In Chesapeake, voters will decide on renewing a fire levy.

The fire department, which is shared with Union Township, has faced several expenses in recent years, such as replacing the roof on the fire station and crew members have sought funds to obtain new equipment and to replace outdated gear.

Lawrence Township has a fire renewal levy on the ballot as well, at 1 mill for five years, commencing in 2020 and first being due in 2021.

In Ironton, a 1.75 percent levy on income will go before voters. It is intended to provide revenue for the city’s general needs and expenditures.

Voters in Athalia have two levies before them.

The second is a renewal of tax for current expenses, at 2 mills for five years. It would commence in 2020 and be first due in 2021.

There is also one option for alcohol sales before voters this fall. End Zone Pizzeria in Ironton is seeking permission to sell wine and mixed beverages on Sunday between 10 a.m. and midnight.