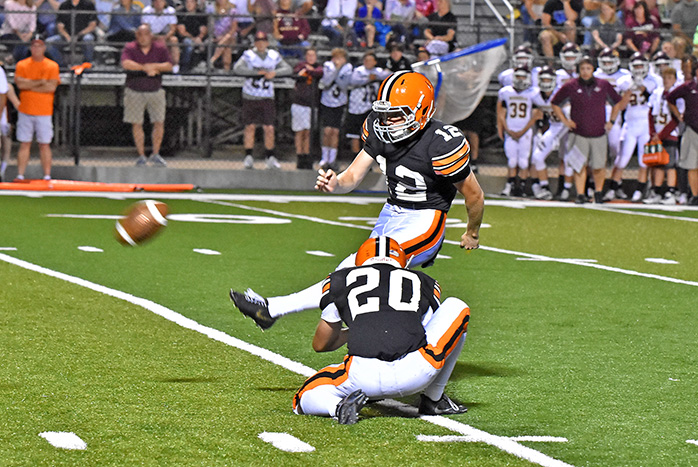 Just because it’s early doesn’t mean it isn’t important.
It’s only the third game of the season but the implications are as big as if it was the season finale.
The Fairland Dragons and Ironton Fighting Tigers meet at 7:30 p.m. Friday at Tanks Memorial Stadium with both teams 2-0. And since this is the first Ohio Valley Conference game, neither team wants to begin the league season with a loss.
Fairland’s offense has been in high gear with wins over Tolsia 34-12 and Oak Hill 42-21.
Ironton has relied on its defense as the offense has sputtered at times and is looking for some consistency. The Fighting Tigers routed rival Wheelersburg 30-6 and blanked Russell 10-0.
“Any time you beat two clubs that are of that high quality, it’s always good for your program,” said Fairland coach Melvin Cunningham.
“But on the flip side of that, I don’t believe we’ve played our best football yet. As coaches, we have to put our kids in the best position to succeed, starting with me. Our defense has played phenomenal and these guys have a great understanding of leverage, getting many hats to the ball.”
Fairland running back Michael Stitt has 211 yards rushing on 23 carries, quarterback Max Ward is 20-of-34 for 262 yards and a touchdown while Gavin Hunt seven receptions for 151 yards.
Stitt also had six catches for 68 yards.
“Fairland has very good athletes, a ton of speed, they like to get the ball out in space,” said Ironton coach Trevon Pendleton.
“Defensively, we have to tackle in space, trying to get all 11 kids to the ball. We have to play with great effort above all else.”
Ironton only led Wheelersburg 3-0 at the half.
Ohio State commit Reid Carrico leads the Fighting Tigers’ ground game with 206 yards on 42 carries and has scored three touchdowns. He’s also caught four passes for 56 yards and a score.
Quarterback Gage Salyers is 12-of-22 for 166 yards and a touchdown.
Ironton’s defense has only allowed 99 total passing yards in two games. The Fighting Tigers have given up 359 rushing but 139 of that has come on two carries, 72 yards by Wheelersburg’s Makaya Mathews and 67 by Russell’s Nathan Conley.
Ironton won last year’s meeting 41-23.
The Lawrence County Chamber of Commerce plans to honor the Ironton Tanks 100th anniversary at Friday’s game. Former Ohio State and Detroit Lions defensive back William White will be on hand for the ceremonies.
After 1930, the Tanks and Portsmouth Spartans merged and joined the NFL in 1933. The franchise was purchased by a Detroit group who moved the team which was then named the Lions.

COLUMBUS, Ohio (AP) — Ohio State University has lost its fight to trademark the word “The.” The U.S. Patent and... read more