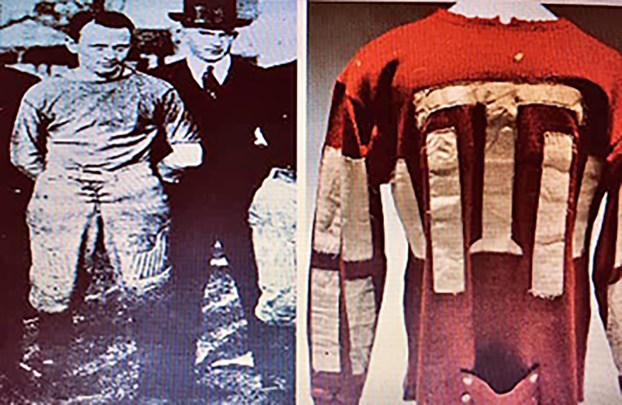 Rick Mayne grew up in Ironton and knew the history. In fact, his family had a big part in its history and recording it as well.

Mayne’s grandfather Charles Elmer Mayne was a World War I veteran who was a member of the first Ironton Tanks football team. His father, Don Mayne, was a longtime news reporter for the Ironton Tribune and Herald Dispatch.

Rick himself was in the media business working at several radio stations as an announcer, salesman, front office employee and part owner.

And, yes, he was involved in sports as a play-by-play announcer for area high school games.

Rick Mayne is one of the few descendants from the Ironton Tanks semi-pro football team celebrating its 100th anniversary this year. And, he has a special place in his heart for the Tanks because of his grandfather who played on the team from 1919 to 1921.

Elmer Mayne played center and middle guard for the Tanks. He regaled stories of those days to his grandson.

“Playing those positions led by grandfather to what he termed were a very bad set of knees,” said Rick. “His take was he beat Joe Namath on bad knees from football by 50 years.”

Elmer Mayne played for the Tanks before going to work full-time with the E.J. Merrill Drug Company, whose owner by the same name was one of the many investors in the Beechwood Stadium project that saw members of the town raise $33,000 in one week back in 1926 to construct a covered stadium, which is now known as Tanks Memorial Stadium.

Elmer Mayne said the first Tanks were comprised mostly of local players from the neighborhood teams, namely Mayne’s team the Irishtown Rags and The Lombards from the southern end of Ironton.

However, the practice of recruiting more players or better players began around the second or third year of the Tanks. Prospective players were promised a job with the Ironton Fire Department, the telephone company or the rail yard in Russell, Ky.

Working at a local job would allow them time to practice and play for the Tanks.

But the recruiting didn’t just focus on the working man. College players were recruited as well. Those players would have a college game on Saturday and then play for the Tanks on Sunday using fake names and disguising themselves by taping their faces in order to protect their amateur standing.

Elmer Mayne said the first paid Tanks player was Doc Elliott, a fullback from Toledo who was given $50 per game, which included expenses.

Eventually, Nick MaMahon became the team’s general manager and he wrote letters to college players offering them jobs if they agreed to play for the Tanks.

Nebraska All-American running back Glenn Presnell led the nation in rushing in 1927 and came to play for the Tanks in 1928. Presnell was the highest paid Tanks player at $300 a game or the equivalent of $4,609 a game by today’s standards.

As Rick Mayne reflects on the Tanks anniversary and all its memories, he can only smile.

“The very name of the team will be a lifelong reminder of one of my favorite places to be on a football game night: at the stadium,” said Rick.