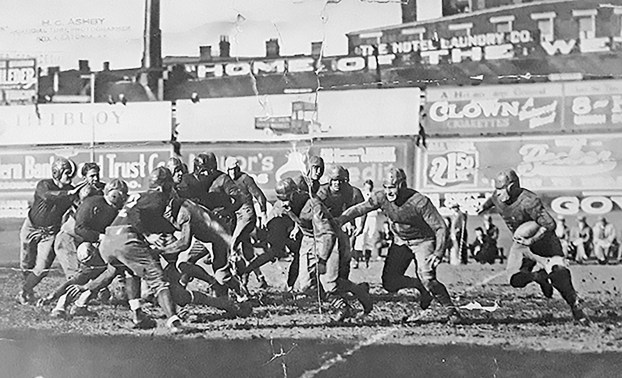 The Ironton Tanks were a famous and successful semi-pro team for 12 seasons, but there were two games that defined their greatness.

It was 1930, and what proved to be the team’s final season due to the Great Depression and loss of jobs and revenue to support the franchise.

Despite having three losses in the 1930 season, the Tanks were scheduled to play the Chicago Bears of George Halas and the New York Giants of Wellington Mara to close out the season. The games were played in Cincinnati at Redland Field in a three-week span with a game against the Akron Awnings sandwiched between.

Presnell led the Tanks to a 13-12 win over the Giants as he scrambled and threw a touchdown pass on the game’s final play. He then kicked the decisive extra point to beat the team led by former All-American quarterback Benny Friedman and All-Pro guard Denver Gibson.

None of the Tanks are alive today, including Presnell who died in 2004 at the age of 99. During one of his later interviews, he recalled the final moments of the game.

“I saw Gene Alford down near the end zone waving his hands. I threw the ball and he caught it and stepped into the end zone to score. That pass was the biggest thrill of my career,” Presnell said.

The late Harold Rolph, a native of Ironton, played for Xavier University and signed with the Tanks in 1929.  Considered a behemoth for the era at 6-foot-3, 190-pounds, Rolph once talked about Presnell’s elusive running style and cannon-like arm. He vividly recalls Presnell’s scramble on the final play against the Giants.

“Glenn always made that move. It was his favorite move. He would always run one way, then spin back the other way and cut back across the grain. He was one of the best I ever saw at that,” said Rolph.

With a victory of the NFL’s runner-up team, the Tanks had only a short time to celebrate. Two weeks later on Nov. 30, the Tanks faced the Bears and the game’s most famous player in Red Grange.

The Bears finished third in the NFL standings behind the champion Green Bay Packers and the Giants. But unlike the game with the Giants, the Tanks didn’t need any last-second heroics as they beat Chicago 26-13.

The Bears were 9-4-1 and third in the 11-team NFL that season. The lineup featured three-time All-American Harold “Red” Grange and fullback Bronko Nagurski. Grange has signed a six —figure contract with MGM after graduating in 1925 from Illinois.

Both Grange and Nagurski are in the Hall of Fame.

After a short kickoff to start the game, the Tanks drove down the field behind Presnell and Keith Molesworth. Presnell went 4 yards for the touchdown and it was 6-0.

After stopping the Bears at the 12-yard line, Presnell broke free on an 88-yard scoring run as he got a pair of crushing blocks. He kicked the extra point and it was 13-0.

The Bears got an interception but fumbled the ball back to the Tanks. Molesworth then went 22 yards for a TD and it was 19-0.

The Bears got within 19-13 in the second half before The Tanks used a long pass from Presnell to Molesworth to get deep into Chicago territory and Molesworth finished off the drive and the Bears with a 5-yard scoring run.

Presnell is not in the Hall of Fame today but reportedly is under consideration.

Rick Mayne grew up in Ironton and knew the history. In fact, his family had a big part in its... read more