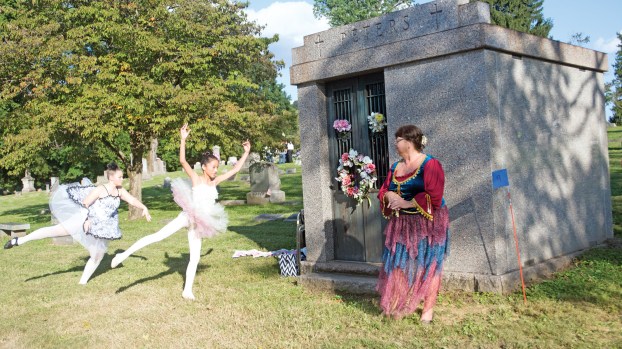 Antoinette Sherpetosky Peters, a Russian ballerina, portrayed by Yvonne Sinnott of the Yvonne DeKay School of Dance, right, watches as one of the ballerinas that come out at midnight to dance with her, portrayed by Kaeli Huff, left, dances around Woodland Cemetery as part of the Lawrence County Historical Society’s Historical Walk in 2018. (The Ironton Tribune|Mark Shaffer)

The Lawrence County Museum and Historical Society will host its annual historic cemetery walk at Woodland Cemetery on Saturday, Sept. 28.

The event, which has been taking place for about 20 years, features members of the community portraying the notable figures buried at the cemetery.

“We have about 20 this year,” Kay Rader, a trustee at the museum, said of this year’s group of portrayers.

Some of those on the tour include:

• Col. Bill Lambert, the World War I flying ace, who will soon be the subject of a new museum in Lawrence County. This year marks the 125th anniversary of his birth.

• Antoinette Sherpetosky Peters, a Lithuanian-born member of the Russian Imperial Ballet, who is buried with her husband, Ironton native and steel businessman James F. Peters.

• Nannie Kelly Wright, the only female ironmaster in America, who was said to, at the peak of her wealth, been the second richest woman in the world after Queen Victoria.

• T.H.B. Jones, a former sheriff and warden of the Ohio state penitentiary in the early 1900s.

• Magellan Hairston, the coach of the Waterloo Wonders basketball team, who was added to the tour last year.

• Mary White Slater, a noted poet, who was also a new addition in 2018.
The tour is always adding new figures to the line up.

• This year will see the addition of famed illustrator and writer Edward Gorey. It was recently discovered that ashes of the influential macabre creator, who died in 2000, were interred at the cemetery in the grave of his mother.

Rader said the tour begins at 5 p.m. and is self guided. It is free and open to the public and parking will be available in the lot across from the cemetery.

“And for people who have trouble walking, there will be buses available,” she said. “It is one of the many things the museum does for the community.”

Rader said the next big event organized by the museum will be its annual holiday walking tour of the city’s historic churches, which is set for Saturday, Dec. 7. The tour, which features a Christmas-themed presentation at each stop, wraps up at the museum, which ends its season on that date.

Lawsuit could be settled soon

With two of the companies that produced opioids agreeing to tentative settlements, many municipalities are contemplating what to do with... read more