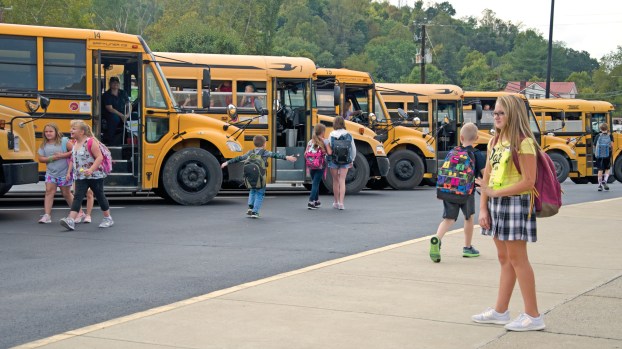 DEERING — Students departing Dawson-Bryant Elementary in the afternoon have noticed a change in school bus boarding and parent pick ups this week.

Helping out on the scene are six fifth graders, who have been selected to serve as the school’s first ever safety patrol.

Assistant principal Monica Mahlmeister said the six were chosen by the school for their leadership skills.

“They were voted on by our staff,” she said, adding that the students had a good attendance record for the previous school year and had zero behavioral referrals.

Safety patrols are a national program, sponsored through the American Auto Association, to help with traffic safety. The program’s inception dates back to the 1920s.

While other districts in the county have safety patrols in place, this year will be the first for Dawson-Bryant.

She said, as the school is rural, they do not have the students working on the main road, but instead have them assist in school bus loadings and with the exit where parents pick up their children.

“It’s going great,” Holden Walker, one of the patrols said of the experience.

Mahlmeister said the students will serve in the position all year, but may rotate duties.

“And we may expand things,” she said of the possibility of adding new members.

With fall coming soon, Ironton aLive will be having its first Harvest Moon festival on Saturday at the Ironton Farmers... read more