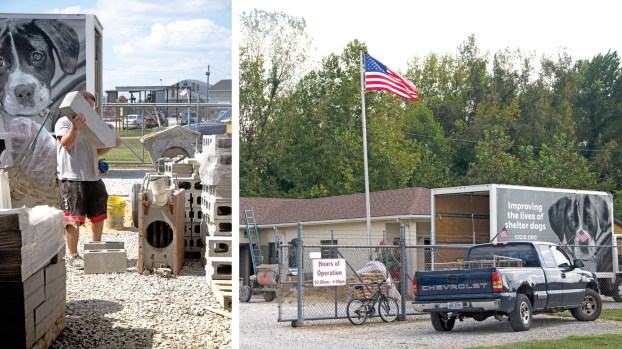 The Lawrence County Animal Shelter is undergoing a much-needed renovation thanks to a Columbus-based animal charity. “I’ve been working with Gigi’s since I got here,” shelter director Denise Paulus, who took the position in April, said. “This is a big deal for us. We’re so excited.”

Called Gigi’s Animal Rescue, the charity began last year and chose the Lawrence County Animal Shelter as an official shelter partner. The shelter was already familiar with the group since it has taken more than 200 dogs, including nearly 100 puppies, to their Columbus campus for adoption and treatment before they find a permanent home.

Paulus said the shelter is a pilot facility for Gigi’s efforts.

“They’ve done work in places like Jackson, but this is drastically more than anywhere else. They felt we were the shelter who needed it most, since nothing has been done here since 1991.”

The group also saw what shape the shelter was in and offered to help renovate it as well as making a generous contribution of $3 for every $1 the Lawrence County Animal Shelter could raise.

Paulus said the two-week crowdsourcing campaign is being promoted on Facebook and social media.

By Wednesday afternoon the effort had raised $3,113 in donations from 93 people.

The renovations to the facility include a makeover of the main ward, with new kennel doors, new concrete flooring with improved drainage, a separation wall, the creation of a room just for puppies, an isolated dog intake room, and a food preparation area. All the areas will be finished in epoxy from floor to ceiling. And the building is getting its first heating and cooling system.

“The main objective of everything is to better the welfare for the animals,” Paulus said. “There will be less diseases and it will improve the morale of volunteers who can take pride in the new facility as well.”

Paulus said the shelter has a staff of four and receives help from volunteers and those completing community service.

“And those doing community service, they love animals and their heart is in it,” she said.

Paulus said they have received help from the community, such as from Dave Willis, a local block mason, who has donated work for them, and Ann Jenkins and Danny Sullivan, who have donated gravel. She said there has also been a generator donated by a company owned by Lawrence County Commissioner DeAnna Holliday.

Paulus said the biggest days of the project would be Sept. 27-29, when 20 volunteers will be coming from Columbus.

“They’ll be staying in a local hotel,” she said. “And we’re looking for other volunteers to come and help.”

She said they are particularly interested in people who can provide meals for those volunteers.